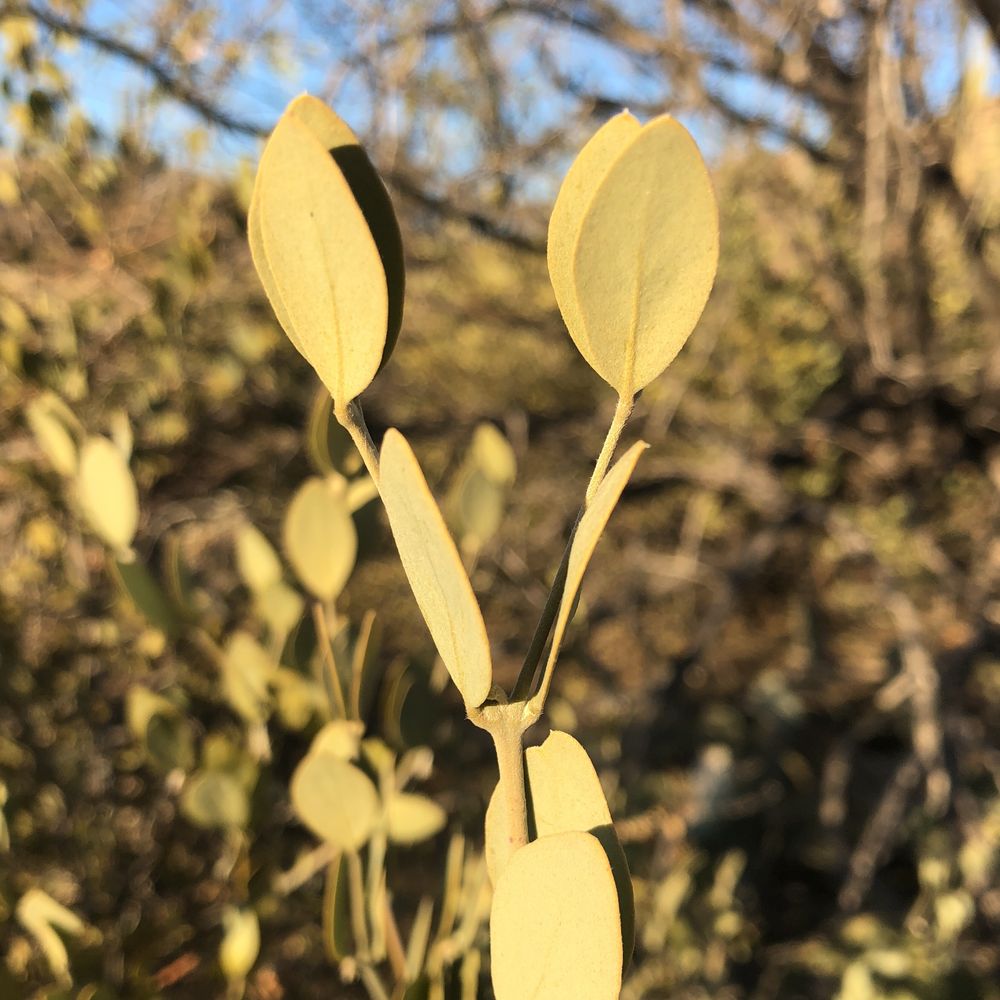 Jojoba /həˈhoʊbə/ (About this sound listen), with the botanical name Simmondsia chinensis, and also known as goat nut, deer nut, pignut, wild hazel, quinine nut, coffeeberry, and gray box bush, is native to Southwestern North America. Simmondsia chinensis is the sole species of the family Simmondsiaceae, placed in the order Caryophyllales. Jojoba is grown commercially to produce jojoba oil, a liquid wax ester extracted from its seed. The plant is a native shrub of the Sonoran Desert, Colorado Desert, Baja California Desert, and California chaparral and woodlands habitats in the Peninsular Ranges and San Jacinto Mountains. It is found in southern California, Arizona, and Utah (U.S.), and Baja California state (Mexico). Jojoba is endemic to North America, and occupies an area of approximately 260,000 square kilometers (100,000 sq mi) between latitudes 25° and 31° North and between longitudes 109° and 117° West. Simmondsia chinensis, or jojoba, typically grows to 1–2 meters (3.3–6.6 ft) tall, with a broad, dense crown, but there have been reports of plants as tall as 3 meters (9.8 ft). The leaves are opposite, oval in shape, 2–4 centimeters (0.79–1.57 in) long and 1.5–3 centimeters (0.59–1.18 in) broad, thick, waxy, and glaucous gray-green in color. The flowers are small and greenish-yellow, with 5–6 sepals and no petals. The plant typically blooms from March to May. Jojoba foliage provides year-round food for many animals, including deer, javelina, bighorn sheep, and livestock. Its nuts are eaten by squirrels, rabbits, other rodents, and larger birds. Only Bailey's pocket mouse, however, is known to be able to digest the wax found inside the jojoba nut. In large quantities, jojoba seed meal is toxic to many mammals, later this effect was found to be due to simmondsin, which inhibits hunger. The indigestible wax acts as a laxative in humans. "“Pet poisonous” – Toxic parts: entire plant esp. stem, roots"