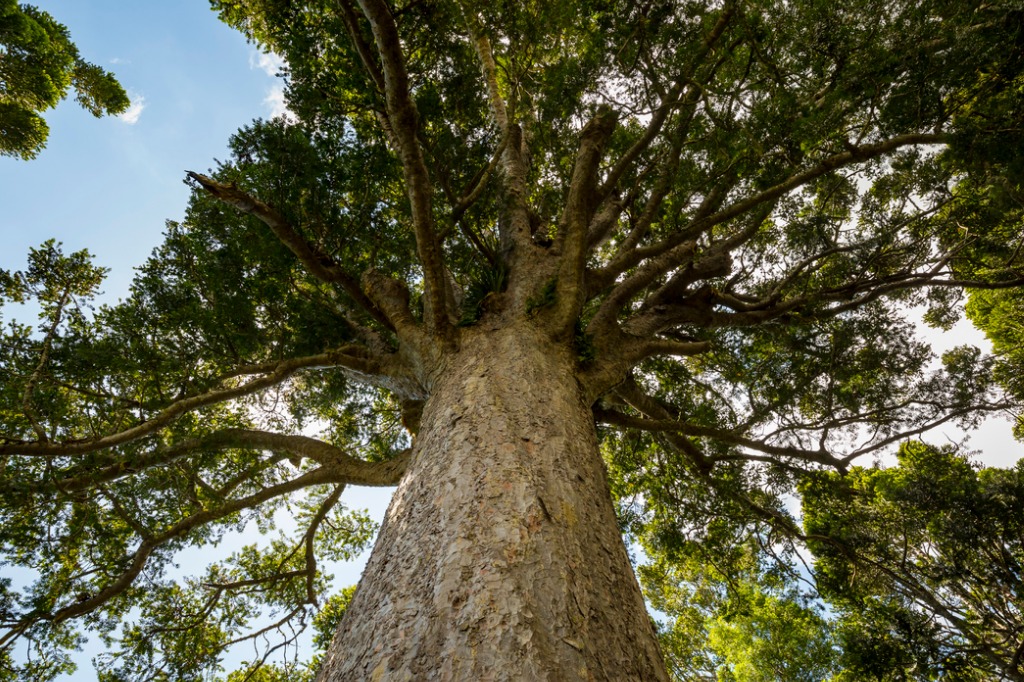 Agathis australis, commonly known by its Māori name kauri (pronounced "Ko-ree"), is a coniferous tree in the family Araucariaceae, found north of 38°S in the northern regions of New Zealand's North Island. The young plant grows straight upwards and has the form of a narrow cone with branches going out along the length of the trunk. However, as it gains in height, the lowest branches are shed, preventing vines from climbing. By maturity, the top branches form an imposing crown that stands out over all other native trees, dominating the forest canopy. Kauri leaves are 3 to 7 cm long and 1 cm broad, tough and leathery in texture, with no midrib; they are arranged in opposite pairs or whorls of three on the stem. The seed cones are globose, 5 to 7 cm diameter, and mature 18 to 20 months after pollination; the seed cones disintegrate at maturity to release winged seeds, which are then dispersed by the wind. A single tree produces both male and female seed cones. Fertilisation of the seeds occurs by pollination, which may be driven by the same or another tree's pollen. In general over the lifetime of the tree the growth rate tends to increase, reach a maximum, then decline. A 1987 study measured mean annual diameter increments ranging from 1.5 to 4.6 mm per year with an overall average of 2.3 mm per year. This is equivalent to 8.7 annual rings per centimetre of core, said to be half the commonly quoted figure for growth rate. The same study found only a weak relationship between age and diameter. The growth of kauri in planted and second-growth natural forests has been reviewed and compared during the development of growth and yield models for the species. Kauri in planted forests were found to have up to 12 times the volume productivity than those in natural stands at the same age. Individuals in the same 10 cm diameter class may vary in age by 300 years, and the largest individual on any particular site is often not the oldest. Trees can normally live longer than 600 years. Many individuals probably exceed 1000 years, but there is no conclusive evidence that trees can exceed 2000 years in age. By combining tree ring samples from living kauri, wooden buildings, and preserved swamp wood, a dendrochronology has been created which reaches back 4,500 years, the longest tree ring record of past climate change in the southern hemisphere.