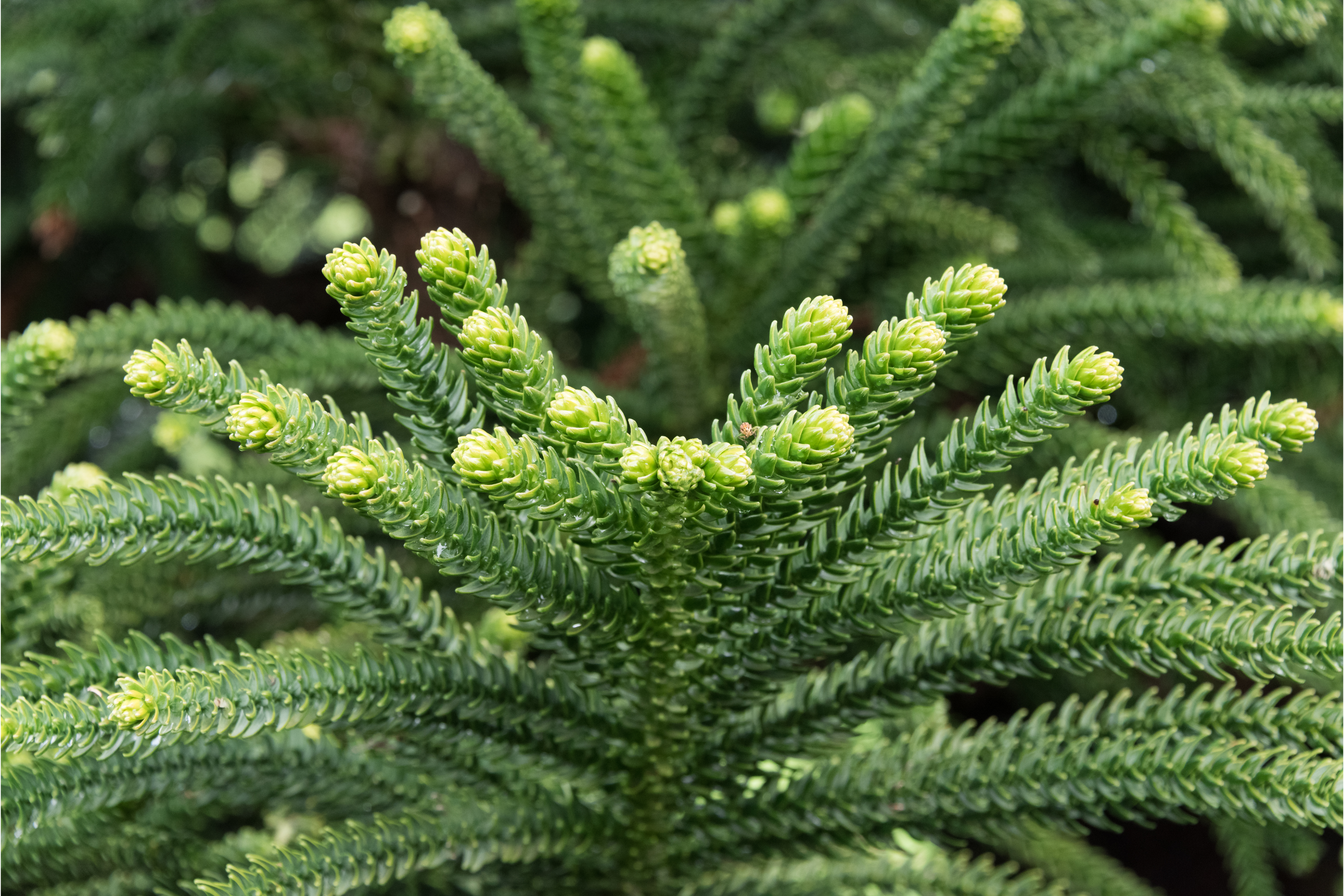 Araucaria biramulata, the biramule araucaria, or piggyback araucaria, is a species of conifer in the family Araucariaceae. It is found only in New Caledonia on the main island of Grande Terre. Araucaria biramulata is a medium-large tree reaching 30 meters in height. As with several other endemic New Caledonian araucaria species, it is threatened by habitat loss with a fragmented wild population of less than 10,000 mature trees, and ongoing decline in remaining populations, with the main threats being forest fires and mining activities. Piggyback araucaria gets its common name from the unusual growth habit of mature trees, where they often develop a second growth tip halfway up the trunk, giving the appearance of a smaller tree "piggybacking" on the side of a larger one. Araucaria biramulata is a species of Plantae in the Tracheophyta family, described by JT Buchholz. Araucaria biramulata belongs to the genus Araucaria, and the family Araucariaceae. The IUCN classifies the species as endangered. Araucaria are mainly large trees with a massive erect stem, reaching a height of 5–80 metres (16–262 ft). The horizontal, spreading branches grow in whorls and are covered with leathery or needle-like leaves. In some species, the leaves are narrow, awl-shaped and lanceolate, barely overlapping each other; in others they are broad and flat, and overlap broadly. The trees are mostly dioecious, with male and female cones found on separate trees, though occasional individuals are monoecious or change sex with time. The female cones, usually high on the top of the tree, are globose, and vary in size among species from 7 to 25 centimetres (2.8 to 9.8 in) diameter. They contain 80–200 large edible seeds, similar to pine nuts, though larger. The genus is familiar to many people as the genus of the distinctive Chilean pine or monkey-puzzle tree (Araucaria araucana). The genus is named after the Spanish exonym Araucano ("from Arauco") applied to the Mapuche of south-central Chile and south-west Argentina, whose territory incorporates natural stands of this genus. The Mapuche people call it pehuén, and consider it sacred. Some Mapuche living in the Andes name themselves Pehuenche ("people of the pehuén") as they traditionally harvested the seeds extensively for food. No distinct vernacular name exists for the genus. Many are called "pine", although they are only distantly related to true pines, in the genus Pinus.