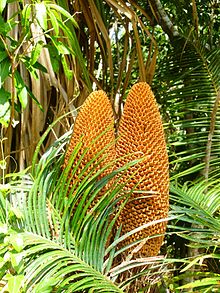 “Pet poisonous” – Toxic parts: entire plant esp seeds Cycas media is a palm-like cone-bearing plant widespread in seasonally dry tropical sclerophyll woodlands close to the east coast of Queensland, with scattered occurrences also in northern Northern Territory and Western Australia, Australia. The dark green leathery, thick leaves are pinnately divided and grow in annual flushes from a massive apical bud. It is tolerant of bushfire and often re-foliates immediately following a dry season fire, before the beginning of the next rainy season. All plant parts are considered highly toxic. However, the seeds were eaten by Aboriginal Australians after careful and extensive preparation to remove the toxins.