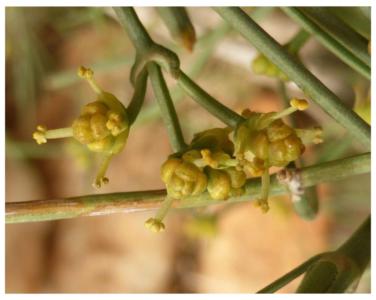 Ephedra altissima is a species of Ephedra that is native to the western Sahara (Morocco, Algeria, Tunisia, Libya, Chad, Mauritania), and also to the Canary Islands. The species is cultivated as an ornamental plant. It was originally described by René Louiche Desfontaines in 1799 and placed in section Pseudobaccatae (=sect. Ephedra), "tribe" Scandentes. In 1996 Robert A. Price classified E. altissima in section Ephedra without recognizing a tribe