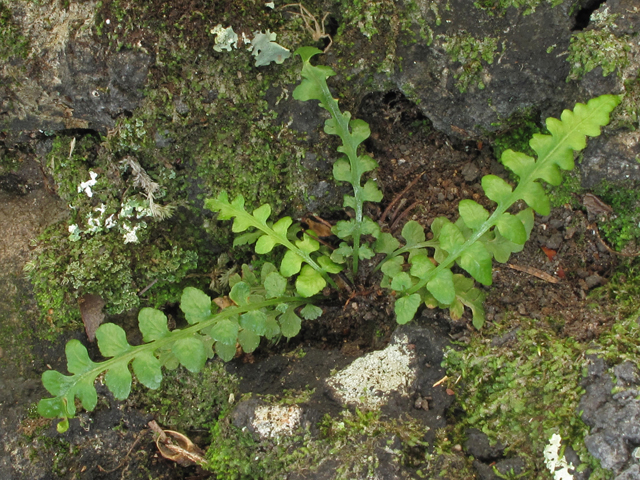 Asplenium pinnatifidum, commonly known as the lobed spleenwort or pinnatifid spleenwort, is a small fern found principally in the Appalachian Mountains and the Shawnee Hills, growing in rock crevices in moderately acid to subacid strata. Originally identified as a variety of walking fern (Asplenium rhizophyllum), it was classified as a separate species by Thomas Nuttall in 1818. It is believed to have originated by chromosome doubling in a hybrid between walking fern and mountain spleenwort (Asplenium montanum), producing a fertile tetraploid, a phenomenon known as alloploidy; however, the hypothesized parental hybrid has never been located. It is intermediate in morphology between the parent species: while its leaf blades are long and tapering like that of walking fern, the influence of mountain spleenwort means that the blades are lobed, rather than whole. A. pinnatifidum can itself form sterile hybrids with several other spleenworts.