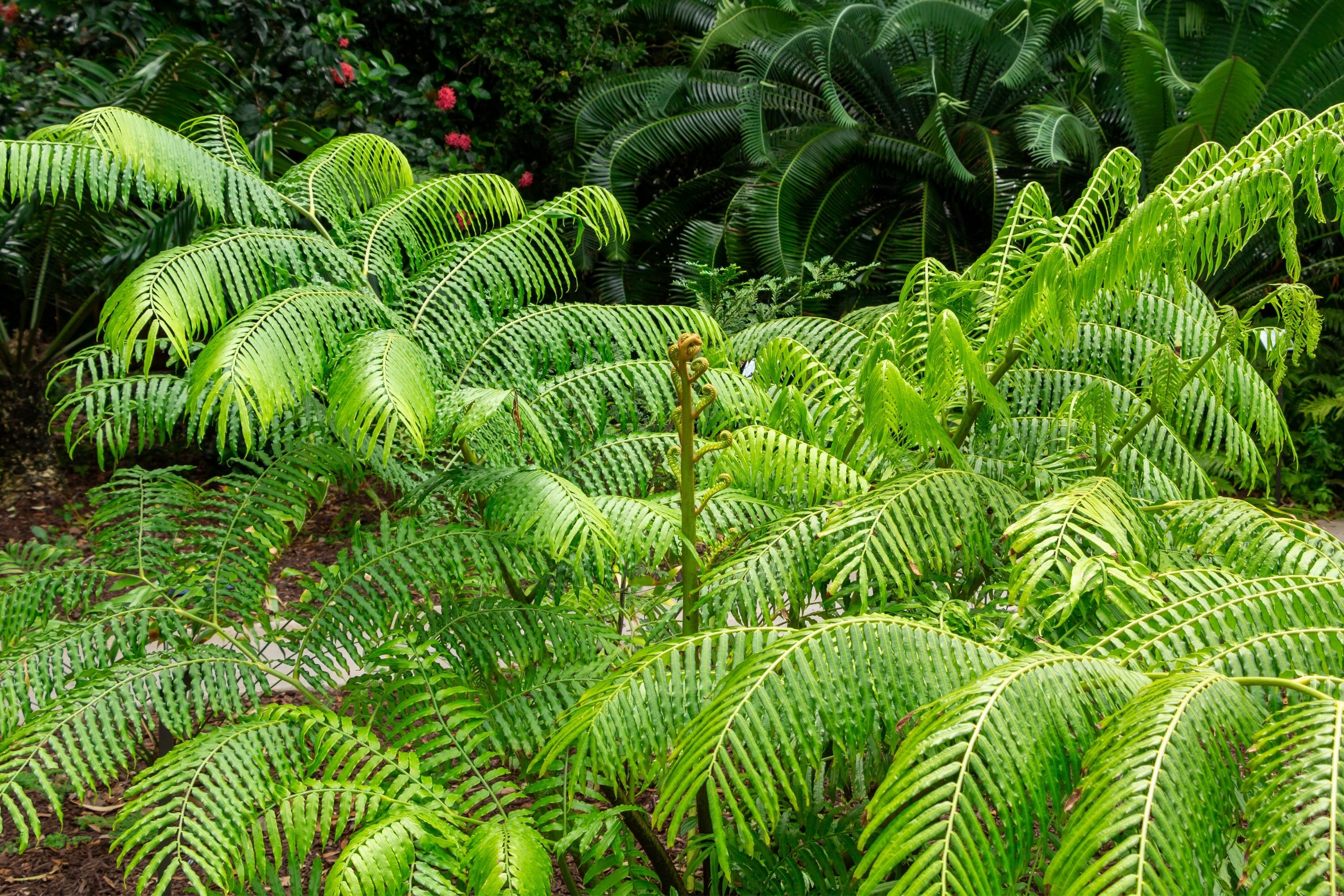 Angiopteris evecta, commonly known as the king fern, giant fern, elephant fern, oriental vessel fern, Madagascar tree fern, or mule's Foot fern, is a very large rainforest fern in the family Marattiaceae native to most parts of Southeast Asia and Oceania. It has a history dating back about 300 million years, and is believed to have the longest fronds of any fern in the world. Angiopteris evecta is a self-supporting evergreen perennial fern with very large bipinnate fronds. The trunk-like rhizome is massive, measuring up to 1 m (3 ft 3 in) in diameter. The older portions of the rhizome lie on the ground while the newer growth may rise vertically up to 1.2 m (3 ft 11 in) high. The arching, glossy green fronds, which emerge from the tip of the rhizome, may reach up to 9 m (30 ft) long and 2.5 m (8 ft 2 in) wide, with the fleshy green petiole (leaf stem) making up 2 m (6 ft 7 in) of that length. They are said to be the longest fern fronds in the world, and despite their enormous size they have no woody strengthening tissues in the fronds to keep them erect—instead they are supported entirely by the hydraulic pressure of the sap. On either side of the petiole where it arises from the rhizome there are flat, rounded, leathery, ear-shaped stipules, known as "auricles", which can measure up to 15 cm (5.9 in) in diameter. The fronds are bipinnate with about 9 to 12 pairs of pinnae measuring up to 150 cm (59 in) long and 45 cm (18 in) wide. Each pinnae carries about 30 to 40 pairs of pinnules that measure around 13 by 2 cm (5.1 by 0.8 in), and both the main rachis and the secondary rachillae (midribs) are pulvinate (swollen at the base). Sporangia are borne on the underside of the pinnules, very close to the margin, in clusters of 5 to 8 opposite pairs. Overall dimensions of this fern can be up to 7 m (23 ft) high by 16 m (52 ft) wide. Angiopteris evecta was originally named and described as Polypodium evectum by Georg Forster in 1786, in his work Florulae Insularum Australium Prodromus. It was moved to the genus Angiopteris in 1794 by Georg Franz Hoffmann, publishing in the journal Commentationes Societatis Regiae Scientiarum Gottingensis. A. evecta is the type species of the genus Angiopteris. The genus name comes from the Ancient Greek aggeion, a vessel, and pteris, a fern, and is a reference to the sporangia. The species epithet is the Latin adjective evectus meaning to carry out, bring forth, raise, or elevate.