This week marks the 20th anniversary of the unveiling of Dolly the cloned sheep. Dolly was created by scientists at The Roslin Institute in Edinburgh using mammary cells taken from a 6 year-old sheep. As such, it was only fitting she be named after country singer Dolly Parton, known for her curvaceous figure. Dolly the sheep was born in July 1996 and announced to the world on February 22nd, 1997.

The creation of Dolly had a tremendous impact on the science community, especially on stem cell research and the development of treatment for degenerative conditions like Parkinson’s disease.

“Cloning enabled gene-targeting strategies to be used, said Professor Bruce Whitelaw, interim director of The Roslin Institute. “We have now moved on from using cloning technology and instead use very efficient genetic engineering methods that can be directly applied to the fertilised egg. These are based on DNA editing technology which enable extremely precise changes of the genome of animals. We apply this exciting method in farm livestock and poultry, aiming to produce animals that are less susceptible to disease.”

To create Dolly, the team of scientists at The Roslin Institute used a technique involving the transfer of the nucleus of an adult cell into an unfertilized egg cell that had previously had its nucleus removed. Then, they used an electric shock to simulate the hybrid cell to produce an embryo, which they then implanted into the womb of the surrogate mother.

Dolly bred twice with a Welsh mountain ram, giving birth to four lambs. She died in February 2003 due to a virus-induced lung disease. The team believes that she aged prematurely having been cloned from a sheep that had already lived 6 years.

Dolly does still have four living genetically identical clones of herself. In 2007, Debbie, Denise, Dianna, and Daisy were born using the same frozen tissue cells. Scientists hope to use the girls to study the long-term health effects of cloning. 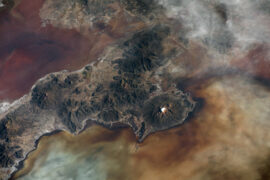