Today’s Video of the Day from the Smithsonian Tropical Research Institute (STRI) describes why male fringed-lipped bats often have a strong-smelling, crusty substance on their forearms.

A team led by Mariana Muñoz-Romo, who is a postdoctoral fellow at STRI and National Geographic Explorer, has confirmed that only male bats develop the crusts, and that they are used for mating purposes.

The bats make the crust using the claws on their hind feet. They scratch their entire body, nibble on their claws, and then spit a sticky yellow substance onto their forearms.

“It is one thing to assume that because only males have a particular feature, it must have to do with mating, but when we measured the size of the smelly crusts on males’ forearms, quantified their testosterone levels and the size of their testes, we found that all of these factors are related,” said Muñoz-Romo.

“Males with the highest testosterone levels and the largest testes have the largest crusts on their forearms, which makes us pretty sure that this trait is associated with reproduction.”

The researchers measured testosterone levels in plasma samples from wild bats. They also confirmed that the enlarged crusts correspond with the time when females are fertile.

“There are actually very few studies that measure testosterone levels, female fertility and one of these male-only traits in mammals, and to the best of our knowledge this is the first study like this in bats,” said Muñoz-Romo. 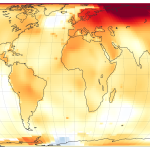