Today’s Video of the Day from the European Space Agency features the Vandenberg Air Force Base in California,  which will serve as the site for the upcoming launch of the Copernicus Sentinel-6 Michael Freilich satellite.

Santa Barbara County, located about 124 miles northwest of Los Angeles, can be seen in the photo with its western and southern borders along the shoreline of the Pacific Ocean.

The Santa Ynez Mountains are visible in dark green directly above the coastal city of Santa Barbara. The San Rafael Mountains and the Sierra Madre Mountains are also visible nearby.

The majority of the mountainous landscape in Santa Barbara County is located in the Los Padres National Forest, which is the second largest national forest in California.

The county’s most densely populated city is Santa Maria, which has an economy that is built upon agriculture. Santa Maria Valley is a leading producer of strawberries, wine grapes, broccoli, avocados, cauliflower, and celery.

The Vandenberg Air Force Base is just below Santa Maria. On November 21, 2020, the Copernicus Sentinel-6 satellite will be launched on a Space X Falcon 9 rocket. The satellite – named after former NASA director Michael Freilich – will expand upon nearly three decades of sea level observations. 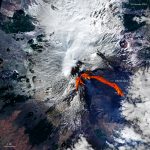 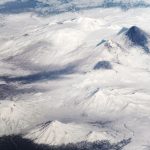