Violent volcanic eruptions persisted on Mars for millions of years •

Today’s Video of the Day from NASA describes violent volcanic eruptions that transformed the surface of Mars for hundreds of millions of years.

The experts analyzed minerals from the Arabia Terra region in northern Mars. They found evidence that thousands of “super eruptions” ripped through Mars about four billion years ago.

The scientists estimate that the explosive activity persisted for about 500 million years. Detailed photographic studies by NASA’s Global Surveyor (starting in 1997), and the Mars Express High Resolution Stereo Camera (which began orbiting Mars in December of 2003), provide evidence of effusive volcanism perhaps as young as 2 to 2.5 million years.

This giant shield volcano is almost entirely constructed of basalt lava flows. It has a height of nearly 25 km (16 mi) above Mars’ surface and a diameter of 600 km, making it about as large as Arizona.

NASA scientists studying volcanic rocks from Mars came to the conclusion that the red planet´s volcano, Mount Olympus, is not dead or dormant but in fact an active volcano whose last eruption might have been as recent as a few years to decades ago.  it was discovered that Mars is the product of a myriad of “super-eruptions” that went on for 500 million years. 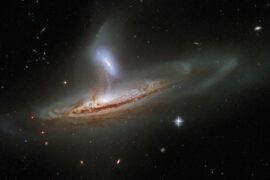