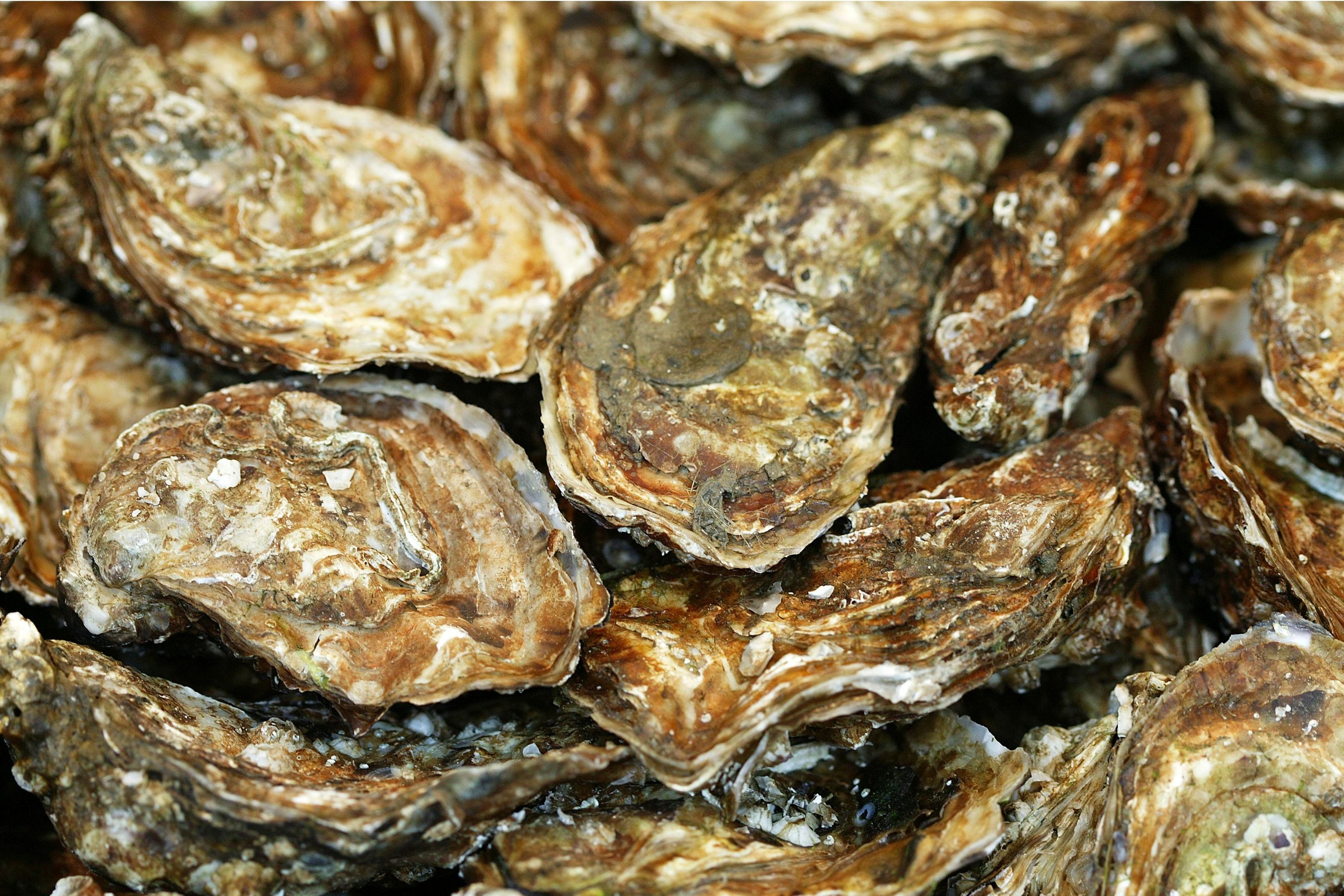 Ostrea edulis, commonly known as the European flat oyster, is a species of oyster native to Europe. In Britain and Ireland, regional names include Colchester native oyster, mud oyster, or edible oyster. In France, Ostrea edulis are known as huîtres plates (flat oysters) except for those that come from the Belon River estuary in Brittany, France, which are known as Belons. The fossil record of this species dates back to the Miocene (age range: 15.97 million years ago to present day). Fossils have been found in Belgium, Italy, the Netherlands, Egypt, Greece, Spain, the United Kingdom, Austria, France and Germany. When mature, O. edulis adults range from 3.8 to 11 centimetres (1.5 to 4.3 in) across. Shells are oval or pear shaped, white, yellowish or cream in colour, with a rough surface showing pale brown or bluish concentric bands on the right valve. The two valves are quite different in shape and size, as the left one is concave and fixed to the substratum, while the right one is almost flat and fits inside the left. The inner surface is smooth, whitish or bluish-grey. Ostrea edulis are gregarious molluscs that start their lives as males. They mature sexually after eight–ten months and may change sex depending on the water temperature. Usually the lifespan can reach about six years, with a maximum of 15 years. Adult oysters feed by filtration. The species naturally ranges along the western and southern coasts of Europe from Norway to Morocco and including most of the British Isles and the Mediterranean coast. Naturally viable populations have appeared in eastern North America from Maine to Rhode Island subsequent to artificial introduction in the 1940s and 1950s. Ostrea edulis can be found in estuarine and shallow coastal water with hard substrata of mud and rocks. Ostrea edulis has been harvested throughout Europe as an important food source since prehistory. During Roman occupation of Britain O. edulis oysters were exported in large quantities back to Italy. However, due to their robust nature and ease of cultivation the Pacific oysters, Crassostrea gigas, account for more than 75 percent of Europe's oyster production. European flat oysters are famously grown in Brittany, France. The true Belon oyster is cultivated in the Belon River, France, and has the AOC protected name. In the 1950s, Dutch scientists artificially introduced Belon oyster seed into the waters around Maine in hopes to establish a viable stock.