What is Amphibole? • Earth.com 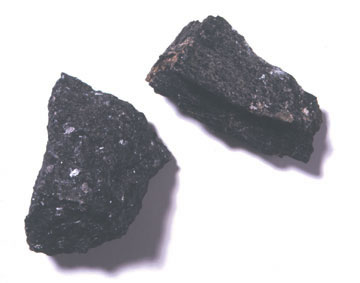 Amphibole defines an important group of dark-colored rock-forming inosilicate minerals composed of double chain SiO4 tetrahedra linked at the vertices and generally containing ions of iron and/ or magnesium in their structures. In chemical composition and general characteristics they are very similar to the pyroxenes and, like them, fall into three series according to their system of crystallization.

The chief difference between amphiboles and pyroxenes is in cleavage:

Also amphiboles are minerals of either original or secondary origin, so in the former case occurring as constituents (hornblende) of igneous rocks, such as granite, diorite, andesite and others. Those of secondary origin have either been developed in limestones by contact metamorphism (tremolite) or result from the alteration of augite by dynamo-metamorphism (actinolite). Pseudomorphs of amphibole after pyroxene are known as uralite.

RJ Hauy was using the name amphibole (Greek amfibolos, “ambiguous”)  to include tremolite, actinolite, and hornblende, so whole group has this term since then . Numerous sub-species and varieties are distinguished, the more important of which are tabulated below in three series. The formulae of each should conform to the general metasilicate formula RSiO3.

Of these, tremolite, hornblende, and crocidolite, as well as the important varieties, asbestos and jade, are treated under their own headings. Brief mention need only be made of some of the others. Naturally, on account of the wide variations in chemical composition, the different members vary considerably in properties and general appearance; the specific gravity, for example, varies from 2.9 in tremolite to 3.8 in aenigmatite.
Anthophyllite occurs as brownish, fibrous, or lamellar masses with hornblende in mica-schist at Kongsberg in

Norway and some other localities. An aluminous variety name is gedrite, and a deep green Russian variety containing little iron as kupfferite.

Actinolite is an important member of the monoclinic series, forming radiating groups of acicular crystals of a bright green or greyish-green color. It occurs frequently as a constituent of crystalline schists. The name (from aktis, a ray, and lithos, a stone) is a translation of the old German word Strahlstein which means ” radiated stone”.

Glaucophane, crocidolite, riebeckite, and arfvedsonite form a somewhat special group of alkali-amphiboles. The first two are blue fibrous minerals occurring in crystalline schists, and are the result of dynamo-metamorphic processes, while the latter two are dark green minerals which occur as original constituents of igneous rocks rich in soda, such as nepheline-syenite and phonolite.

Aenigmatite and its variety cossyrite are rare minerals forming constituents of igneous rocks of the nepheline-syenite and phonolite groups.