What is Berkelium? • Earth.com 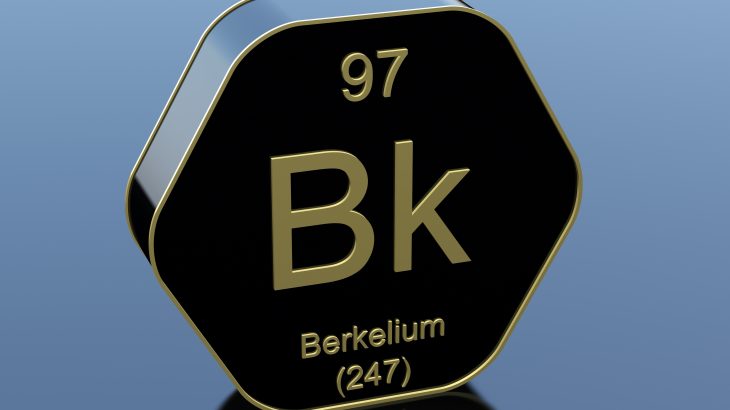 is a synthetic radioactive metallic element. It has the symbol Bk and the atomic number 97. It is also an actinoid found in the actinide series (which includes actinium). Berkelium was first synthesized by bombarding americium with helium ions. It was named after the University of California, Berkeley. This was the fifth transuranic element to be synthesized. This silvery metal easily oxidizes in air at elevated temperatures and is readily dissolvable in mineral acids.

Berkelium was first produced by Glenn T. Seaborg, Albert Ghiorso, Stanley G. Thompson, and Kenneth Street at UC Berkeley in December 1949. The first time Bk was produced in a pure visible amount was in 1958. This element and its compounds have literally no uses outside of basic research and also has no biological role.
There are also 19 known radioisotopes of berkelium. The most stable is Bk-247 with a half-life of 1380 years. While the other fairly stable isotopes are Bk-248 (half-life 9 years) and Bk-249 (half-life 330 days). All the other radioactive isotopes have a half-life of less than 5 days, and the majority of them less than 5 hours. Berkelium has two meta states. The isotopes range in atomic weight from 235.057 (Bk-235) to 254.091 (Bk-254).

Bk-249 is also the most widely used isotope of berkelium produced in large quantities in nuclear reactors. The production of Bk-249 requires 11 successive neutron captures on uranium-238 without any nuclear fission or alpha-decay. Because of this, Bk-249 can only be produced in small amounts at a time. Berkelium-249 is quickly transformed into Bk-250 if is remains inactive in a thermal reactor. It will then decay into californium-250 or curium-245.

Berkelium accumulates in the skeletal system and the radiation from it can cause red blood cell damage. The maximum amount of berkelium the average human can live with in their skeletal system is 0.4 nanograms or 4 billionths of a gram (less than 1 trillionth of an ounce).