What is Cesium? • Earth.com 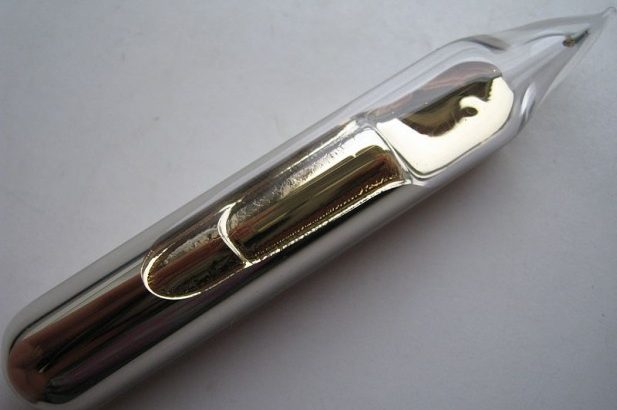 (or Caesium) is a chemical element with the symbol Cs and atomic number 55. Caesium is a soft alkali metal that is silvery-gold. It melts and liquefies at 83 degrees Fahrenheit and is one of only five metals that are liquid close to room temperature. Caesium is a metal that is most widely known for its use in atomic clocks. Cesium comes from the Latin word caesius meaning “Ëœbluish-gray’. It was discovered in 1860 by Robert Bunsen and Gustav Kirchhoff in Durkheim, Germany in mineral water found there.

Several grams of caesium salt were recorded in about 11,600 gallons of mineral water. The caesium was found by using spectrum analysis which picked up bright blue lines. It was the first element to be discovered using this method. Cesium metal was first produced in 1882 using electrolysis. Cesium has been mostly used in research and development since its discovery, mostly in chemical and electrical applications.

Of all the chemical elements, cesium has the lowest ionization potential. It is also the least abundant of the five alkali metals (Francium is actually the least common metal, but it has no stable isotopes). Cesium is non-radioactive. Gallium, francium, rubidium, mercury, and cesium are the only pure metals that are liquid at room temperature. Cesium reacts to cold water and ice in an explosive manner. The temperature for it to react this way must be above -177 degrees Fahrenheit. Cesium hydroxide has a very strong base and will easily scratch the surface of glass. It is sometimes said that cesium hydroxide has the strongest base, although many other compounds without hydroxide bases are stronger.

Cesium is mostly used today in drilling fluids for the oil industry. Because of its stable isotopic nature, cesium is environmentally safer than some other metal compounds that could be used for oil drilling. Cesium is also used in atomic clocks, which are accurate to seconds over long periods of time (thousands of years). Since 1967, the properties of cesium have been relied upon as an accurate measurement of time. Cs-134 is used in hydrology and the nuclear power industry. Early ion engines used cesium as a propellant until the Hughes Research Laboratory found that xenon gas was more suitable for the job.

Other uses for cesium and its compounds/isotopes include organic hydrogenation, medical treatment of cancer, organic chemistry, molecular biology, oxidation and pyrotechnics for infrared flares, spectrophotometry, exhaust reduction of military aircraft, industrial applications for gauges and devices, and has also been used in many magnetometers. Cesium is found in many different sources. The most common sources are lepidolite and pollucite. One of the world’s richest sources of cesium is located in Bernic Lake Manitoba. It is estimated that about 300,000 metric tons of pollucite ore exists within the lakebed with an average of 20% cesium by weight. Pure cesium can be produced by thermal decay of cesium azide.

Cesium has at least 39 isotopes. It has the second most known isotopes of all the elements (francium has the most). The atomic masses of these isotopes range from 112 to 151. Only one of these isotopes (Cs-133) is naturally stable. Almost all the other isotopes have half-lives ranging from a few days to just a few seconds or less. Cs-137 has been produced in nuclear power plants and by nuclear detonation of weapons. Large quantities of Cs-137 was released into the atmosphere during the 1986 Chernobyl meltdown. Cs-137 has a half-life of 30.17 years. Once it decomposes, it turns into barium-137m and then shortly after that into a form of no radioactive barium.

Alkali metals are highly reactive, and cesium, being one of the heaviest alkali metals, is one of the most reactive. It is highly explosive when it comes into contact with water. This contact generates hydrogen gas that is heated by thermal energy that is released at the same time, which then causes ignition of the gas and a violent explosion ensues. Because cesium is so reactive, even ice can trigger an explosion. Cesium also ignites in air and becomes cesium hydroxide or other various oxides. Compounds of Cs are rarely encountered by humans. It is a mildly toxic element because of its similarity to potassium.

Large amounts of cesium can cause spasms and abnormal stimulation. Although similar to potassium, cesium cannot replace it in diet. In lab rat studies, all rats that were fed cesium died. Although Cs is not effectively accumulated in the body, the Cs-134 and Cs-137 isotopes (present in radiation) may represent a radioactivity problem depending on the area.