What is Rain? • Earth.com 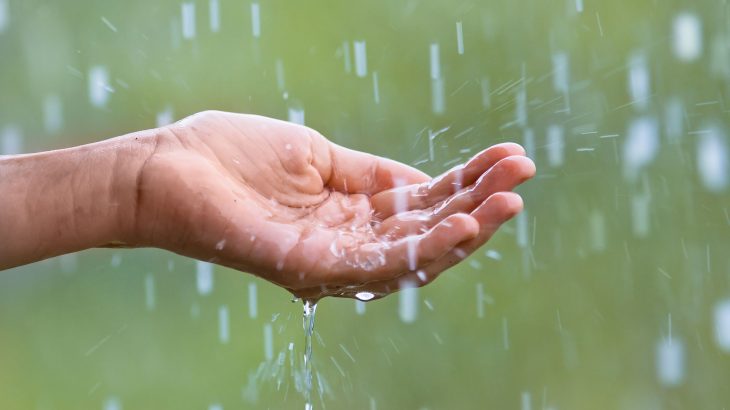 Rain is the primary source of most of the fresh water in the world. It plays an important role for life on Earth as part of the hydrologic cycle. When the moisture from the oceans evaporates into the sky, condenses into droplets, and precipitates from the sky over the Earth’s surface, water is distributed throughout the globe. It is thanks to this form of precipitation that we have suitable conditions for diverse ecosystems, power sources, and crop irrigation.

All plants need at least some water to survive, and rain is the most effective means of watering. A regular watering pattern is vital to healthy plants. Too little or too much rainfall can be detrimental, or even devastating to crops. A drought can be drastic, killing numerous crops, while extremely wet weather can cause disease and fungus. Some plants, such as cacti, are able to thrive in areas with limited precipitation. Tropical plants, however, need hundreds of inches of rain per year to survive.

Excessive rain, especially in the wake of long dry spells that harden the soil such that it cannot absorb water, can cause flooding. Many people find the scent of the rain — during, or immediately after a storm — pleasing and distinctive. The source of this scent is the oils produced by plants which are released first into rocks or soil, and later into the air during rainfall.

Statistics of Rainfall Around the World

Precipitation is measured by the rate at which it falls using a rain gauge. It is considered very light rain when the gauge measures less than 0.01 inches per hour. The classifications continue with light, moderate, heavy, very heavy, and extreme rain with amounts of 2 inches per hour or more.

The Characteristics of a Raindrop

Raindrops are often depicted as being teardrop-shaped, but this is not entirely correct; only drops of water falling from certain objects appear this way at the moment of formation. Small raindrops are more spherical in shape, and larger raindrops become flattened on the bottom, much like a hamburger bun.

Some of the largest raindrops (0.20 inches or more in diameter) become unstable, and fragment. The average raindrop is about 0.05 inches in diameter. Two regions hold the Guinness world record for the largest raindrops: Brazil (in 1995), and the Marshall Islands (1999). Laser image equipment employed by researchers from the University of Washington measured raindrops with a diameter of at least 0.338 inches.

The Formation of Raindrops

After evaporating, water vapor rises into the upper atmosphere where it is cool enough for the vapor to condense. The droplets fall towards the Earth once the water becomes heavy enough to be released from the clouds. Not all of the rain that falls reaches the surface, though; sometimes rain evaporates as it falls, especially through dry air. This type of rainfall is known as virga, or ‘phantom rain’, and often encountered in hot desert regions. The Bergeron process is a scientific explanation of how water vapor turns into rainfall.

Other Types of Rainfall

Both nature and human activities produce some rain that contains more than water alone. Industrial emissions can cause pollutants to react with the water vapor, producing clouds of acid rain. The fumes from various mechanical sources can cause the build up of gases such as sulfur dioxide or nitrogen oxide in the atmosphere in as little as seven days. Acid rain-bearing clouds can be formed and distributed throughout the atmosphere after only five days of build up.

Normally, rain has a pH level just under 6 on the scale. This is due to atmospheric carbon dioxide that dissolves in the droplet and forms extremely small quantities of carbonic acid. In some regions, airborne dust particles contain enough calcium carbonate to counter the acidity levels in precipitation, making it neutral or alkaline. It is considered acid rain if the pH is 5.5 or lower.

There are also efforts to increase the rainfall on several parts of the planet. Many countries are experimenting with cloud seeding — a process inducing rain by releasing salt particles into the air around the clouds. The particles combine with the water vapor to draw more water out of the clouds than normal.

The phenomenon of rain is not isolated to planet Earth; Titan, Saturn’s largest moon, has many channels on its surface that are hypothesized to have been carved by methane rain. The sulfuric acid saturating Venus’ atmosphere evaporates 15 miles above the surface. The gas giants — Jupiter, Neptune, Uranus, and Saturn — also likely have precipitation of various compositions in their upper atmospheres.