What is the Summer Solstice? • Earth.com 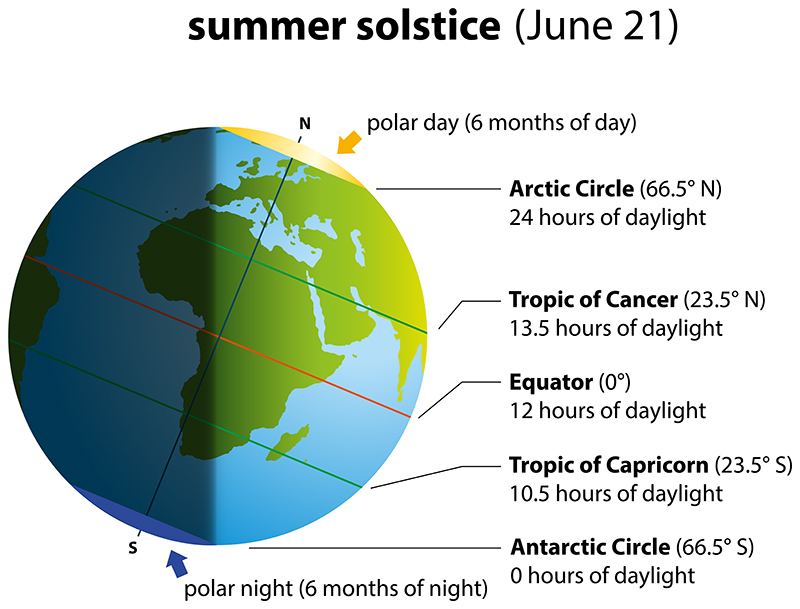 What is the Summer Solstice?

it is derived from the Latin sol (sun) and sistere (to stand still), can be considered the astronomical event to mark the beginning of summer.

For half of the globe, the Solstice day has more sunlight hours than any other day of the year. (excluding Equatorial regions where daylight hours are the same for every season).

On the day of the Summer Solstice (also called Midsummer) in the Northern Hemisphere. The sun reaches its most northerly point in the sky and appears to stand still, just before returning toward its most southerly point, and repeating the cycle. Over the course of a year, the Earth makes one full revolution around the sun.

Some factors can affect the way light from the sun is distributed over the planet throughout the year like :

The positioning of the Earth during the Summer Solstice causes the sun’s light to hit the Tropic of Cancer at a 90 degree angle. The angle of the sun’s rays over the Earth at this time gives the North Pole 24 hours of sunlight, while the South Pole remains dark for 24 hours (signifying the Southern Hemisphere’s Winter Solstice).

For the Winter Solstice, the sun’s light hits the Tropic of Capricorn at a 90 degree angle. During this time, the South Pole receives 24 hours of sunlight, and the North Pole 24 hours of darkness. At this Solstice, the Southern Hemisphere’s summer is beginning, and the Northern Hemisphere experiences the start of winter. Depending on the shift of the calendar, the Summer Solstice occurs some time between:

Interpretation of the Solstice has varied throughout cultures, but most have recognized it as a sign of fertility, observing holidays, festivals, gatherings, rituals and other celebrations around the time of the Solstice. In Northern Europe, the Summer Solstice is most famously associated with Stonehenge, where the sun has been worshipped for thousands of years.