What is the water cycle? • Earth.com 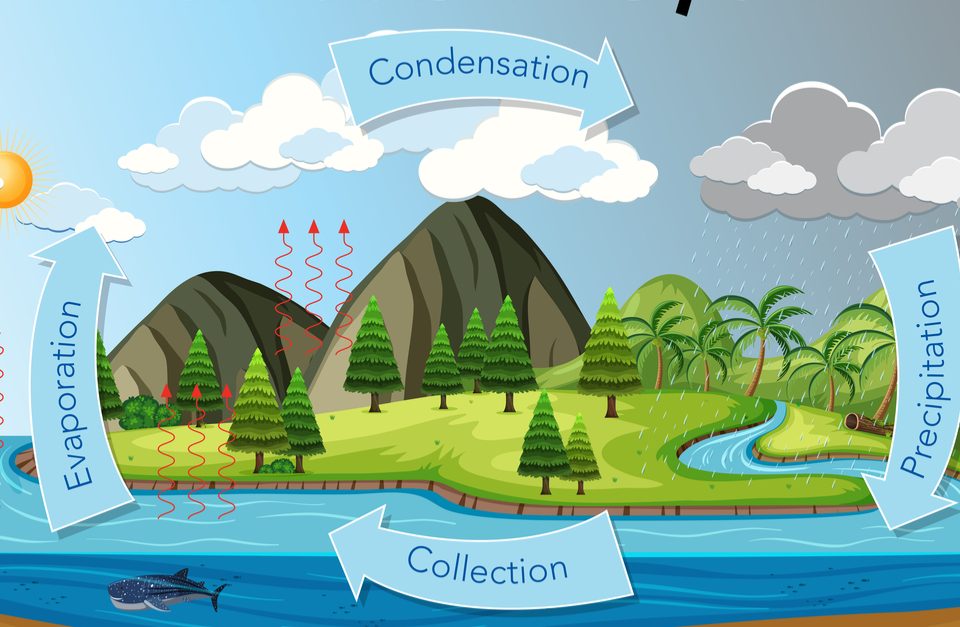 What is the water cycle?

For billions of years, the water existing on Earth has been going through what is known as the water cycle. The water cycle (or hydrologic cycle) describes the continuous movement of water above, below, and on the surface of Earth. This cycle is constantly renewing, accounting for the Earth’s water in all of its forms (solids, liquids, and gases).

Stages and Processes of the Water Cycle

The processes of Earth’s water cycle include:

Heated up by the sun, water particles are floated into the air from just about everywhere on the planet. After evaporating, the vapor spends an average of nine days in the atmosphere. Water also transpires (emerges or leaks out) from plants, following the rest of the vapor through the cycle. Winds and air currents bring water vapor towards the cooler temperatures of Earth’s upper atmosphere, where the vapors condense and become clouds. Traveling around the globe, the clouds gather together, forming larger clouds. Eventually, the water returns to Earth as precipitation. Water can also be frozen and stored for thousands of years if the weather conditions allow.

it is Water flowing over land masses. During this process, the waters travel as rivers and streams that eventually return to the ocean, or become freshwater lakes and ponds. Sometimes, water falls back to the soil from plant transpiration (another process known as evapotranspiration). Water can also seep through soil deep enough to replenish aquifers – underground bodies of rock that store huge amounts of freshwater for centuries. Some of this water can find surface channels to make its way back to the oceans as groundwater discharge. Freshwater springs emerge when groundwater veins find cracks in land surfaces. Over time, all water eventually returns to the oceans where the cycle starts all over again.

The main storehouses for the majority of all water on Earth are the oceans. It is estimated that of the 332,500,000 cubic miles of our water supply, the oceans hold almost 321,000,000 cubic miles (95%) of the total. The oceans also supply about 90% of the evaporated water going through the water cycle. Typically, much of the Earth’s water stays in storage for long periods of time. So Fossil water is groundwater spends many hundreds or thousands of years beneath the planet’s surface Water found in soil remains there very briefly, spreading thinly across the entire planet.

When warmer climates prevail, the flow of water increases through the cycle. During colder periods, more ice caps and glaciers form, decreasing the water flow. During the Ice Age, glaciers covered nearly a third of the planet’s land mass, which kept the oceans about 400 feet lower than they are today. The last global warming trend (about 125,000 years ago), brought the seas about 18 feet higher than the current sea level. It is possible that about three million years ago, the oceans were as much as 165 feet higher than today.

A study conducted in 2007 theorizes that the water cycle will intensify throughout the 21st century. This does not mean that precipitation will increase everywhere on Earth; some regions are actually expected to experience extremely low precipitation, which would result in serious droughts. The drying is projected to be stronger near pole-ward regions, and precipitation is expected to intensify in the equatorial regions.

Glacial retreat – when the supply of water to glaciers cannot keep up with the loss of water from melting – is one example of the drastic changes we could experience in the water cycle. Glacial retreat has been extensive since 1850. Some major human activities that are affecting the changing water cycle include: agriculture, industry, construction of dams, deforestation and afforestation, groundwater removal through the use of wells, water removal from rivers and streams, urbanization, and chemical alterations in the atmosphere.