What Are Hydrothermal Vents? An Unlikely Home • Earthpedia • Earth.com 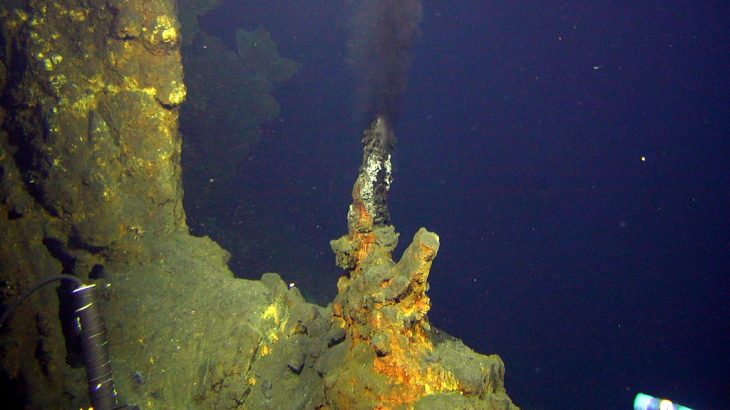 What Are Hydrothermal Vents? An Unlikely Home

Deep below the ocean floor exists an unearthly biome that was unknown to science until 1977: hydrothermal vents. These alien landscapes are home to superheated water, billowing clouds of toxic chemicals, and strange life that exists nowhere else on earth.

Hydrothermal vents typically form at locations called mid-ocean ridges. These are giant underwater mountain ranges formed when two tectonic plates slowly move away from each other. In their absence, new land called crust forms. These ridges form the longest mountain range on earth spanning 65,000 kilometers. To date, the InterRidge Database has record of over 500 vent sites. They are scattered around the globe, and typically found in locations where there is also existing volcanic activity.

Deep below the surface of these forming mountain ranges is the material for new earth: magma. Seawater is able to leak down through cracks and porous rock, eventually coming into contact with this magma – which is often over 1000 degrees Celsius. This water becomes superheated and flows upwards towards the boundary between the tectonic plates. Sometimes this water can attain temperatures in excess of 700 degrees Celcius as it exits the vent. As this water rises, is also takes with it dissolved chemicals.

Hydrothermal vents can be broadly divided into two categories: black smokers and white smokers. Each is named for the characteristic color of the smoke that they emit which contains a specific profile of minerals. Black smokers are typically found in the Bathyal zone (a division of the ocean from 1000 to 4000 meters below the surface) most commonly between 2500 to 3000 meters down. The characteristic black color comes from the high content of sulfur-containing compounds, called sulfides. When these dissolved particles make contact with cold surrounding ocean water, they precipitate out of solution and form giant black chimneys far underwater.

White smokers are similar to their black counterparts but are typically much older. Their characteristic white color comes from dissolved minerals that are lighter in color including calcium, silicon, and barium. White smokers are usually slightly cooler, and the vents are ‘off-axis.’ This means that they are located slightly away from the mid-ocean ridges from which they get their energy.

The water and ocean floor surrounding hydrothermal vents are one of the most unique biomes that exist on earth. The combination of hot water temperatures and unique dissolved minerals gives rise to species that exist nowhere else on earth. Let’s take a look at some of the animals that call this place home. 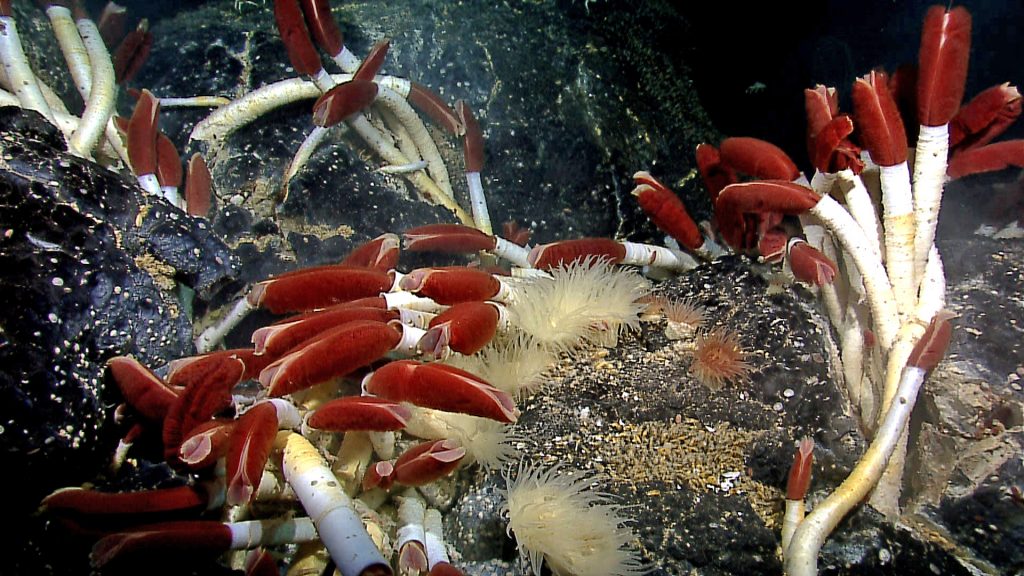 This worm (Riftia pachyptila) was discovered on the original 1977 expedition that discovered hydrothermal vents off the coast of the Galápagos Islands. Colonies of worms live next to the vents – they thrive in moderate temperatures of 15 to 20 degrees Celsius. The worms live up to their namesake, sometimes growing as long as eight feet. They do not have mouths or digestive tracts, but instead rely on a symbiotic relationship with bacteria that live inside of them. The bacteria break down the chemicals released from the hydrothermal vents and produce organic molecules that the worms can use for energy. 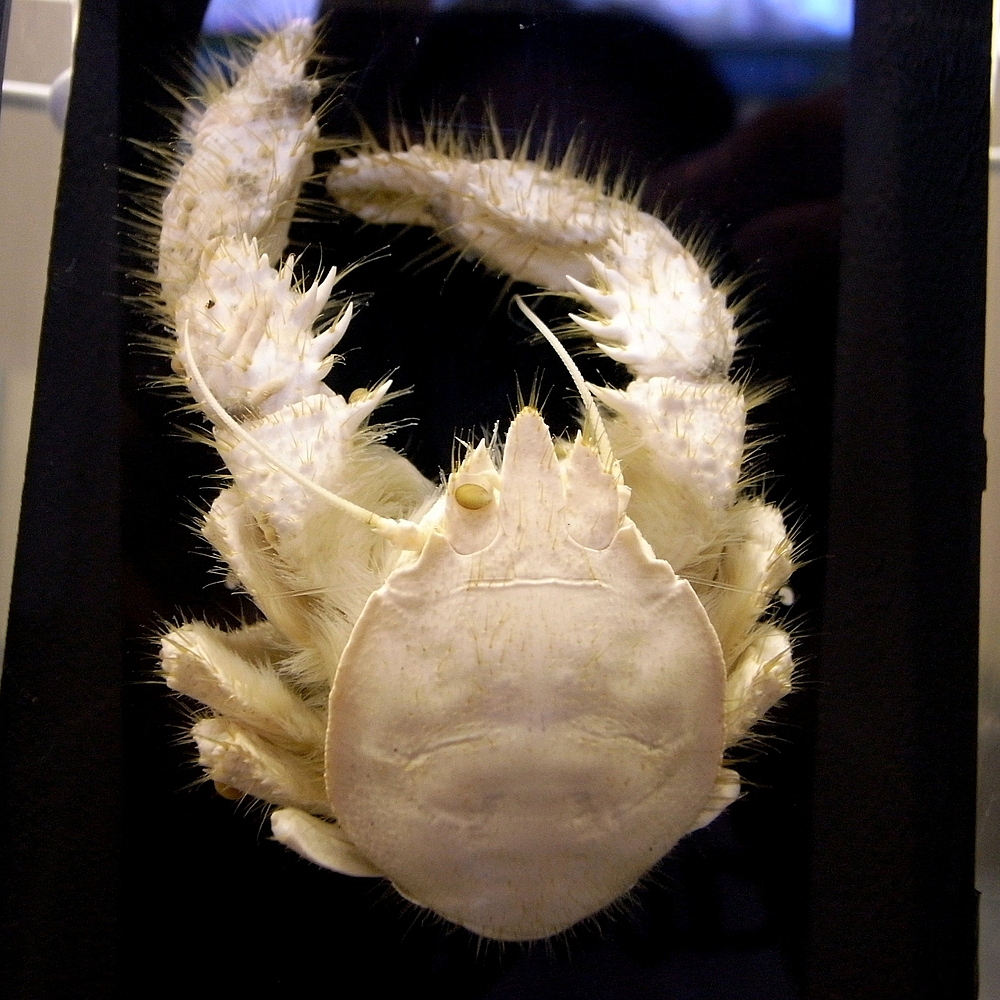 Named for their characteristic white body and hairy arms, the yeti crabs (Kiwaidae) are a family of crustaceans that live next to hydrothermal vents. They were discovered in 2005 off the coast of Easter Island in the south Pacific, and since then, several species belonging to the family have been identified. One of the oddest behaviors of the crabs is that they do not live in solidarity. Because the zone that they are capable of living in is so small, scientists have estimated their population density to be roughly 700 crabs per square meter near some vents. 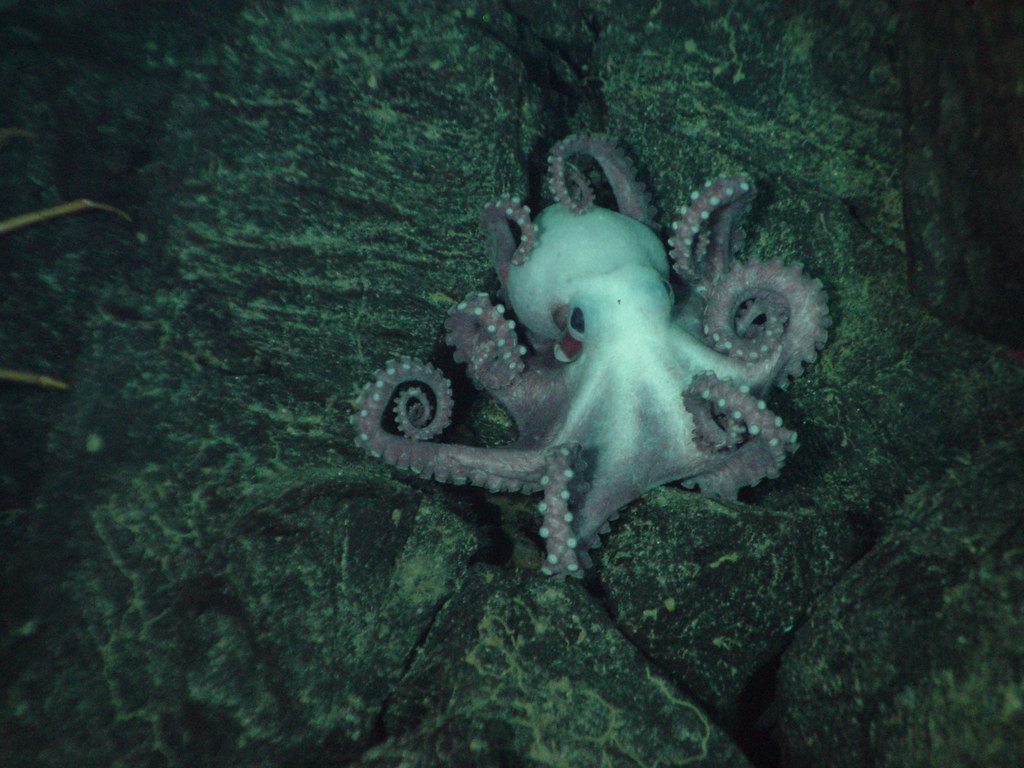 This deep-sea swelling cephalopod (Vulcanoctopus hydrothermalis) is very different from its more temperate family members. First of all, like many deep ocean creatures, it doesn’t have any pigmentation. There is no need to blend into its surroundings when potential predators can’t see their prey. Secondly, there is no evidence that V. hydrothermalis has an ink sac. Unlike a classic movie octopus, it is not able to spray a plume of dark ink while it gets away. This is likely due to the confined habitat where the octopus lives. Too close to the vents, and it will fry, too far away, and it can die of hypothermia.

Why do we even care about these strange ecosystems and the creatures that inhabit them? Hydrothermal vents are important for many reasons. Firstly, they help to move energy, in the form of heat, from the earth’s interior to its surface. In the process, these events can also help to regulate global ocean chemistry. As we’ve seen, they also provide a home for rich and complex ecosystems of creatures that exist nowhere else on planet earth. By gaining a better understanding of how life survives in such harsh conditions, scientists hope to one day better understand how life could live in distant parts of our solar system – like Mars and beyond.