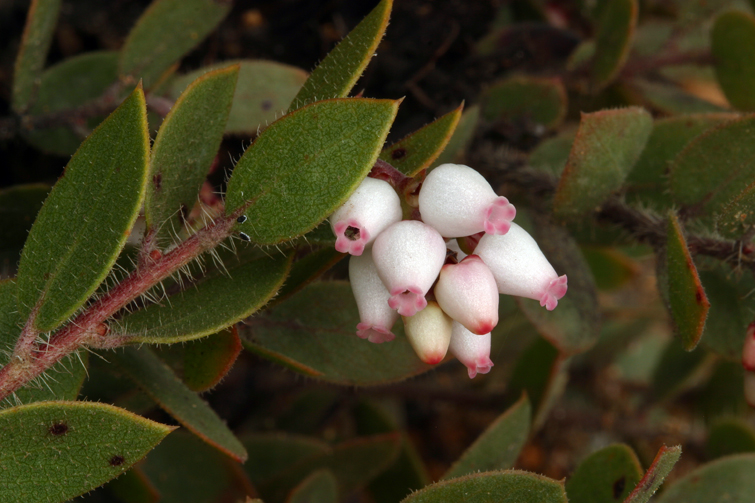 Arctostaphylos myrtifolia NatureServe Explorer Species Reports -- NatureServe Explorer is a source for authoritative conservation information on more than 50,000 plants, animals and ecological communtities of the U.S and Canada. NatureServe Explorer provides in-depth information on rare and endangered species, but includes common plants and animals too. NatureServe Explorer is a product of NatureServe in collaboration with the Natural Heritage Network. ITIS Reports -- ITIS (the Integrated Taxonomic Information System) is a source for authoritative taxonomic information on plants, animals, fungi, and microbes of North America and the world.Arctostaphylos myrtifolia is a rare species of manzanita known by the common name Ione manzanita. It is endemic to the Sierra Nevada foothills of California. It grows in the chaparral and woodland plant community on a distinctive acidic soil series in western Amador and Calaveras Counties. There are only about 17 occurrences, but the plant is abundant in some areas of its limited range.  This is a federally listed threatened species.Arctostaphylos myrtifolia is a red-barked, bristly shrub reaching just over a meter in maximum height. The small bright green leaves are coated in tiny glandular hairs and are shiny but rough in texture. They are less than 2 centimeters long. The inflorescence is a raceme of urn-shaped manzanita flowers on bright red branches. The fruit is a cylindrical drupe only a few millimeters long. FWS Digital Media Library -- The U.S. Fish and Wildlife Service's National Digital Library is a searchable collection of selected images, historical artifacts, audio clips, publications, and video.

No critical habitat rules have been published for the Ione manzanita.
Back to full archive