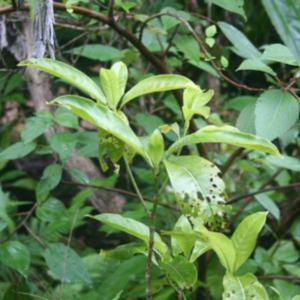 Psychotria hobdyi NatureServe Explorer Species Reports -- NatureServe Explorer is a source for authoritative conservation information on more than 50,000 plants, animals and ecological communtities of the U.S and Canada. NatureServe Explorer provides in-depth information on rare and endangered species, but includes common plants and animals too. NatureServe Explorer is a product of NatureServe in collaboration with the Natural Heritage Network. ITIS Reports -- ITIS (the Integrated Taxonomic Information System) is a source for authoritative taxonomic information on plants, animals, fungi, and microbes of North America and the world. FWS Digital Media Library -- The U.S. Fish and Wildlife Service's National Digital Library is a searchable collection of selected images, historical artifacts, audio clips, publications, and video.Psychotria hobdyi , the milolii kopiwai, Hobdy's wild-coffee or kopiko, is a species of plant in the family Rubiaceae. It is endemic to the Hawaiian Islands, where it is known only from the island of Kauai. There are about 10 populations for a total of about 120 individuals. It is threatened by habitat loss and was federally listed as an endangered species of the United States in 2010.ohmer – milolii kopiwai Subordinate Taxa. This plant has no children Legal Status. Wetland Status. Interpreting Wetland Status. Related Links. More Accounts and Images; Integrated Taxonomic Information System (PSHO) Wildlife. Food. Source …