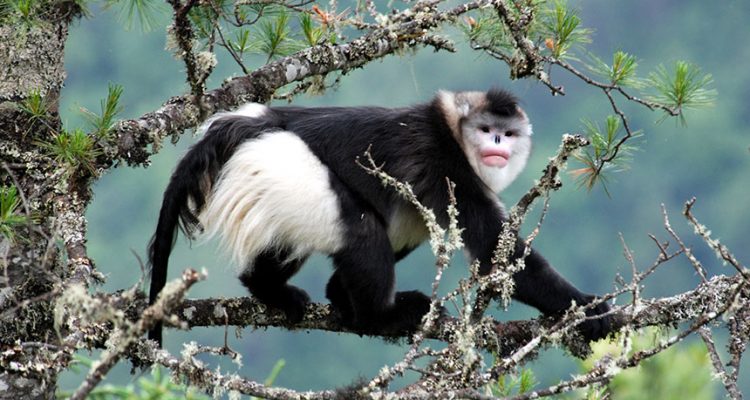 FWS Digital Media Library — The U.S. Fish and Wildlife Service’s National Digital Library is a searchable collection of selected images, historical artifacts, audio clips, publications, and video. The black snub-nosed monkey, also known as the Yunnan snub-nosed monkey, is a large black and white primate that lives only in the southern Chinese province of Yunnan, where it is known to the locals as the Yunnan golden hair monkey and the black-and-white snub-nosed monkey. The common name, black snub-nosed monkey, is issued to Rhinopithecus strykeri, inhabiting the Northern Sino-Myanmar border. Coniferous and deciduous forests in the mountainous regions of Yunnan are the ideal terrain for these primates. It is threatened by habitat loss, and is considered an endangered species. With their unique adaptations to their environment, these monkeys thrive at extreme altitudes despite the below freezing temperatures and thin air. This primate’s diet is mainly made up of the large amounts of lichens available in their region.