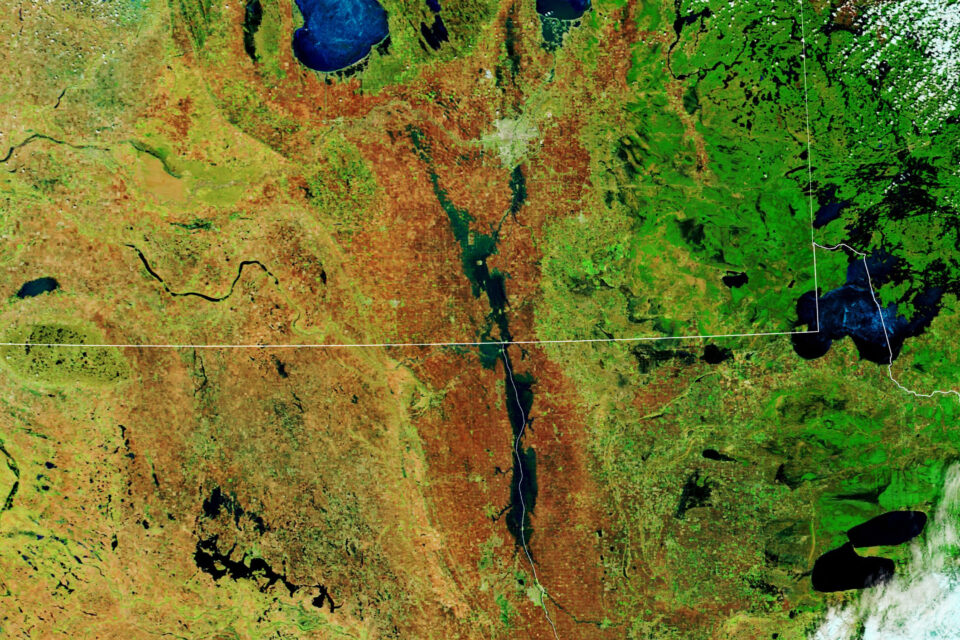 Today’s Image of the Day from NASA Earth Observatory features the Red River Valley of Minnesota, North Dakota, and Manitoba, where flooding is the worst its been in a decade.

“An extreme spring blizzard, multiple rainstorms, and melting winter ice swelled the Red River of the North and its tributaries, driving them out of their banks and across a broad, flat floodplain. The deluge comes one year after the same region endured extreme drought,” reports NASA.

According to the U.S. National Weather Service, the water level on the Red River at Pembina, North Dakota crested at 52.27 feet on May 8. Here, the flood stage is 39 feet. In northeast North Dakota, there are major concerns about the Bourbanis Dam, which has endured weeks of high water.

“In Canada, at least 26 municipalities remain in states of emergency across southern Manitoba Province. Roads have been flooded on both sides of the international border, and some towns have been isolated by the high water,” says NASA. “According to Canadian authorities, the Red River flood this year is already the sixth largest on record (by volume) at Emerson, Manitoba. Forecasters were calling for more rain in the region on May 12.”

The false-color image of the Red River Valley was captured on May 10, 2022 with the Moderate Resolution Imaging Spectroradiometer (MODIS) instruments on NASA’s Terra satellite.