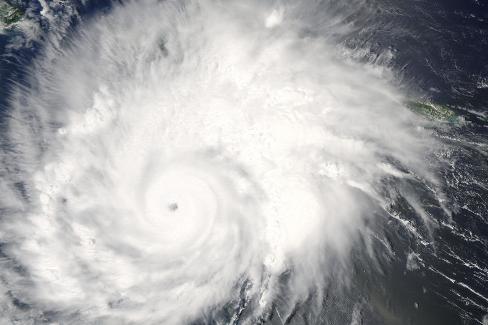 The MODIS instrument flying aboard NASA’s Aqua satellite captured this true-color image of Hurricane Ivan on September 15, 2004 at 18:50 UTC (2:50 PM EDT). At the time this image was taken Ivan was located approximately 170 miles south of the Alabama coastline and was moving towards the north at 14 mph. Ivan continues as an extremely dangerous Category 4 storm with maximum sustained winds near 135 mph with higher gusts. The National Hurricane Center is expecting Ivan to make landfall early Thursday morning as a major hurricane (Category 3 or higher).
The MODIS Rapid Response System provides this image at additional resolutions and formats.

Hurricane Ivan was a large, long-lived, Cape Verde hurricane that caused widespread damage in the Caribbean and United States. The cyclone was the ninth named storm, the sixth hurricane and the fourth major hurricane of the active 2004 Atlantic hurricane season. Ivan formed in early September, and reached Category 5 strength on the Saffir–Simpson Hurricane Scale (SSHS). Ivan caused catastrophic damage in Grenada as a strong Category 3 storm, heavy damage in Jamaica as a strong Category 4 storm, and then severe damage in Grand Cayman, Cayman Islands, and the western tip of Cuba as a Category 5 hurricane