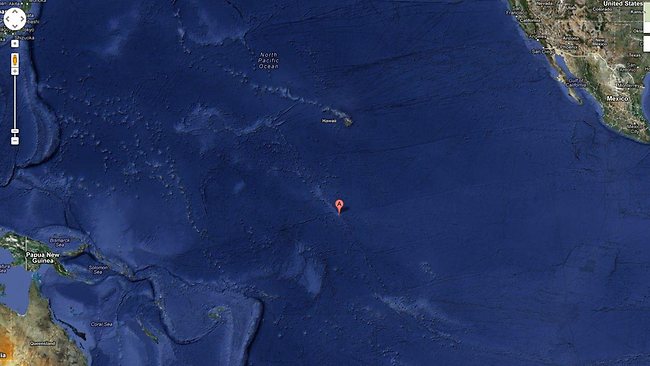 The tiny islands that make up the island nation of Kiribati are scattered over five million square kilometers of the Pacific Ocean. Located on the Equator southeast of Hawaii, the 33 islands of Kiribati are coral atolls surrounded by extensive coral reefs. It is the reefs, not the land, that make the islands visible in this image, acquired by the Moderate Resolution Imaging Spectroradiometer (MODIS) on NASA’s Aqua satellite on December 20, 2003. The white shells that form the reef reflect light back to the satellite. Through the shallow ocean water, the reflected light is a vibrant turquoise.

Kiribati officially the Republic of Kiribati (Gilbertese: Ribaberiki Kiribati), is a sovereign state in the central Pacific Ocean. The permanent population is just over 110,000 (2015), more than half of whom live on Tarawa atoll. The state comprises 32 atolls and one raised coral island, Banaba. They have a total land area of 800 square kilometres (310 sq mi) and are dispersed over 3.5 million square kilometres (1.3 million square miles).
Their spread straddles both the equator and the 180th meridian, although the International Date Line goes round Kiribati and swings far to the east, almost reaching the 150°W meridian. This brings the Line Islands into the same day as the Kiribati Islands. Kiribati’s easternmost islands, the southern Line Islands, south of Hawaii, have the most advanced time on Earth: UTC+14 hours.
Kiribati became independent from the United Kingdom in 1979. The capital, South Tarawa, which is now the most populated area, consists of a number of islets, connected by a series of causeways. These comprise about half the area of Tarawa Atoll.