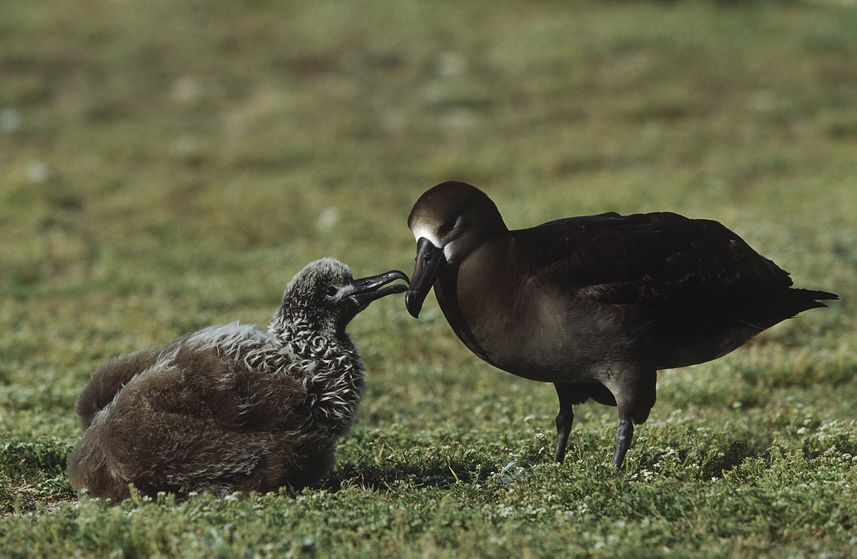 The Blackfooted Albatross  nesting colonies are in Hawaii.  Also the Black-footed Albatrosses are beautifully adapted for a life at sea and can remain airborne for hours.

The black-footed albatross, like the rest of its family, forms long term pair-bonds that last for life. After fledging the birds return to the colony after three years, and spend two years building nests, dancing and being with prospective mates, a behavior  that probably evolved to ensure maximum trust between the birds (raising an albatross chick is a massive energetic investment, and a long courting period establishes for both birds that the other is committed). They will start reproducing after about seven years, mating every two years.

Nests are simple depressions scraped in the sand, into which one dull white with reddish brown spots egg is laid. The egg is incubated for just over two months (65 days). Also both birds incubate the egg, the male incubating more as the female leaves soon after hatching to recoup reserves used for egg-laying. The average time spent on incubating shifts is 18 days.

However, mates can wait up to 38 days to be relieved, and if something happens to the mate the other has been recorded incubating for 49 days without food or water.

Therefore the  chick is brooded for 20 days by its parents, after which both parents leave the nest and return to feed the chick. Also the chick is fed regurgitated food by sticking its bill inside that of its parent. Fledging occurs after 140 days.

All but 2.5% of the population is found among the Northwestern Hawaiian Islands.