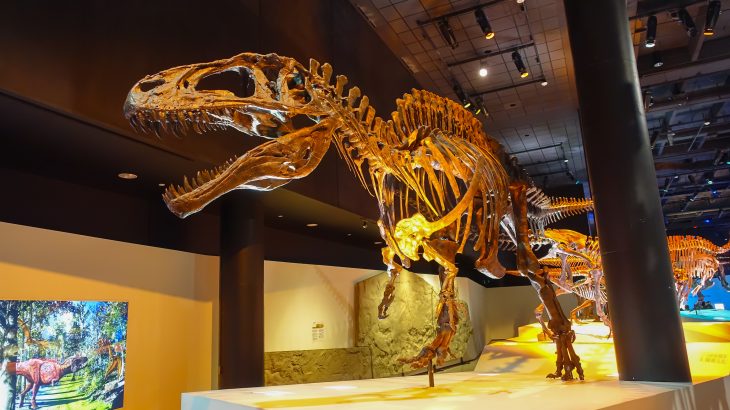 Road cuts and digging at construction sites sometimes lead to the discovery of fossils and archaeological sites. As we reported earlier this summer, a triceratops was found at a construction site just outside of Denver, Colorado. Two years ago, a mammoth was discovered while a subway was being built beneath Los Angeles. The lost tomb of King Richard III of England was even uncovered beneath a parking lot 530 years after his violent death. Mexico City is known for it’s subway work uncovering remains and ruins of the Aztecs, including one discovery of 50 children’s graves.

Obviously, all these discoveries mean is that the Earth beneath each of our feet is a treasure trove of the forgotten past quite literally buried. Those who dig in the ground tend to find things lost beneath the surface. This is how the US Army created its own unplanned fossil collection.

In the case of most archaeological sites and vertebrate fossil discoveries, the remains must be properly documented, sometimes even excavated before work can continue. Others have stumbled onto fossils on their private land. Sometimes, this can lead to an unintentional build up of fossil collections. This is the case with some ranchers in the American west who have turned to selling fossils or leasing land out to professional collectors to supplement their income. The government has also inadvertently stumbled on many fossils.

A feature written on the US Army’s website asks, “What’s the Army doing with dinosaurs?” A fair question and one that may bring to mind scenarios of a weaponized Jurassic Park. Rest assured, the dinosaurs in question are very dead fossil remains. Mainly, the army ended up encountering fossils in much the same way civilian construction crews sometimes do.

The US Army Corps of Engineers is often charged with large scale public works, such as dams and flood control construction. All together, the Army corps of engineers manages 400 lake and river sites accessible to the public in 43 states. This amounts to the corps managing some 12 million acres of public land, tiny compared to all federal land but substantial nonetheless. In those 12 million acres, there have been many paleontological and archaeological discoveries.

Sometimes flooding reveals evidence of inland seas in the form of fossils. In 1993, Coralville Iowa was the stage for massive flooding. The Gazette reports that residents remember it as a time when it just wouldn’t stop raining. Eventually, the flood water rose over the local reservoir, subsided and then the rain came again. It’s disasters like this that the Army Corps of Engineers is often called upon to stop since the Flood Control Act of 1936 was passed. After the water subsided, the corps returned to Coralville to find the flood had revealed more fossils like those the town was first named after.

Since the Army owned managed the Coralville Lake, it technically owned all of the newly revealed fossils of the Devonian Fossil Gorge as well. The Gorge itself was created entirely by the 1993 flood and expanded by a flood in 2008 to reveal more of the 375 million year old Devonian ocean floor. The fossils illustrate that the Midwest of the United States was once an inland sea, splitting the east from the west and populated by corals, gastropods, bivalves, trilobites, and strange armored fishes among others. As stunning as this find is, it’s not one of the most impressive fossil finds for those of us biased towards large vertebrate animals.

The Washington Post reported on the chance discovery of an impressive fossil found on Army Corps of Engineers land. On Labor Day in 1988, Kathy Wankel was on a small island in the Fort Peck reservoir when she saw what turned out to be a shoulder blade. Little did Mrs. Wankel know but she’d discovered a fossil that would end up going on display in the Smithsonian’s National Museum of Natural History in 2014.

The shoulder blade belonged to a 38 foot long T. Rex known informally as “Wankel’s Rex” or “The Nation’s Rex.” For 20 years the T. Rex was on display at Montana’s Museum of the Rockies, where a cast replica of it still meets visitors outside the main entrance. Eventually the T. Rex, still technically owned by the US Army, was moved to the Smithsonian. The T. Rex is very nearly complete and quite large, it’s also the first T. Rex to be found with it’s tiny forearms in tact.

Still, more of what the army owns remains in storage than on display. The secret of any fossil collection is that for every well mounted skeleton decorated with tasteful lighting and exhibit signs, there are probably dozens of dusty crates packed with dead things still encased in stone sitting in a warehouse. This is true of the Army’s collection just as it’s true of most museums of any size. Beyond many of the fossils in storage or being researched in a lab out of public view, the Army also owns many fossils that remain mostly in the ground. Some of the fossils can even be dug up as souvenirs by amateur collectors.

The Devonian Fossil Gorge near Coralville is open to small time collecting with a few rules. At Caesar Creek Lake in Ohio, the Army uncovered more Devonian fossil beds while blasting to create an emergency spillway. Today, people can collect fossils there as well, which may include trilobites, the state fossil of Ohio. The only caveat is that would be collectors must first obtain a free permit. Tools aren’t allowed in collecting and only specimens smaller than your palm may be kept.

If you don’t want to intentionally go looking for fossils, you can still think of the possibilities the next time you dig in your garden or start work on a new basement. Beneath our feet lie the crumbling remains of different worlds before this one, waiting with no expectations to be discovered, hiding in plain sight.