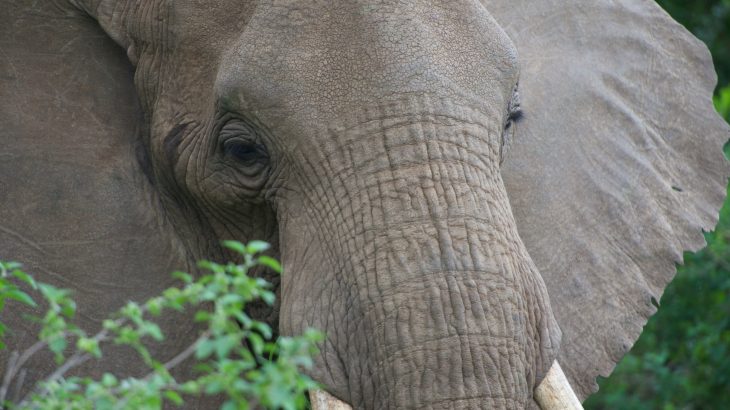 African elephants evolved wrinkled skin to help them cool off

Along with its enormous size and long, ivory tusks, the African bush elephant is known for its characteristic wrinkly, gray skin. While its wrinkled epidermis may seem undesirable to us humans – who often pay hundreds of dollars a year to stay wrinkle-free – its unappealing appearance serves an important purpose.

Researchers from the University of Geneva (UNIGE), Switzerland, and the SIB Swiss Institute of Bioinformatics have reported in the journal Nature Communications that the many crevices that make up an elephant’s skin are designed to help these mammals regulate their body temperature. The extensive network of tiny crevices on the elephant’s surface retains water and mud, protecting their skin from parasites and intense solar radiation.

It’s known that African elephants lack sweat and sebum glands, which help other mammals keep their skin moist and flexible. So to avoid overheating and get rid of parasites, African elephants are constantly wallowing in mud.

After receiving skin samples from scientists and museums in Switzerland, France, and South Africa, the multidisciplinary team of researchers assessed the samples and used a custom computer model to determine the functions of an elephant’s skin. Close inspection revealed that their skin is deeply sculptured by an intricate network of extraordinarily small crevices, all interconnected. The minuscule pattern of millions of channels prevents the shedding of mud, and allows spreading and retention of 5 to 10 times more water than on a flat surface.

The researchers used a computer model to show that the combination of the skin’s hyper-keratinization, shedding-deficiency, and lattice of millimetric elevations is able to cause mechanical bending stress to accumulate in between the skin elevations during the progressive thickening of the skin, ultimately forming cracks.

One area of focus in developmental biology is to discover how forms and shapes are created by heterogeneous tissue differentiation and growth as a result of differential gene expression throughout the body. But complex phenotypes can also be a result of mechanical instabilities – such as the folds and wrinkles of an elephant’s skin – caused by mismatched growth between adjacent tissue layers. Examples of this in our own body include the looping of our gut and the folding of our brain’s cerebral cortex.

This study is the first to show that African elephant skin is characterized by a network of channels that not only look like cracks, but are true physical cracks in the animal’s keratinized epidermis. They surmise that thickening of the African elephant keratinized epidermis is a result of imbalance between its formation at the base and its shedding at the skin surface. This actually brings about an interesting parallel to the skin morphology of these elephants and that of humans with the condition ichthyosis vulgaris, a common genetic disorder that is known to cause dry, scaly skin.

If these findings are confirmed by molecular and cell biology analyses, their equivalence could be a notable link between a human pathological condition and the skin of another mammal species.

“This correspondence would also demonstrate that similar mutations that occurred independently in the evolutionary lineages of humans and elephants turned out to be unfavorable in the former and adaptive in the latter,” says lead author Michel Milinkovitch, a professor at the Department of Genetics and Evolution of the UNIGE Faculty of Science and Group Leader at the SIB Swiss Institute of Bioinformatics.