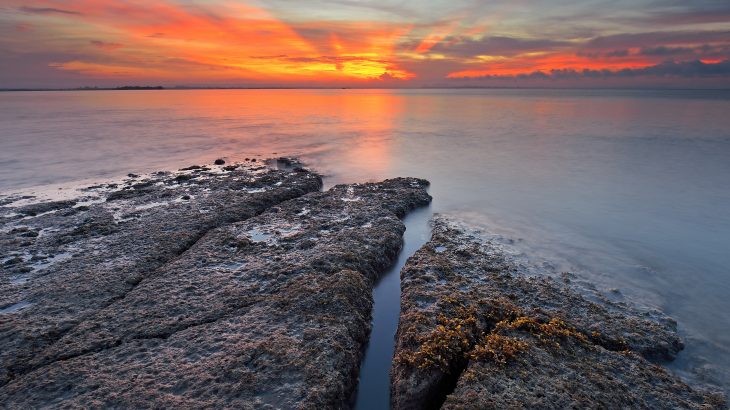 A giant armored fish that lived 380 million years ago used a feeding strategy similar to that of modern-day basking sharks, according to a new study led by the University of Bristol.

During the late Devonian period, Titanichthys was one of the largest predators in the sea. While its exact size is not clear, scientists have estimated that the fish exceeded five meters in length. Just like the basking shark today, Titanichthys had a massive jaw that was over a meter in length.

Titanichthys lived alongside another large placoderm fish, Dunkleosteus, which had a lower jaw full of fangs and crushing plates. By contrast, the lower jaw of Titanichthys was narrow and lacked sharp edges for cutting.

Titanichthys has been presumed to have been a suspension-feeder, which is a fish that simply opens its mouth and swims slowly to capture lots of prey. However, there is no fossilized evidence to confirm this theory.

The Bristol team set out to investigate by comparing the lower jaw of Titanichthys with those of other species.

“We have found that Titanichthys was very likely to have been a suspension-feeder, showing that its lower jaw was considerably less mechanically robust than those of other placoderm species that fed on large or hard-shelled prey,” explained study lead author Sam Coatham. “Consequently, those feeding strategies would probably have not been available for Titanichthys.”

The study was focused on Titanichthys fossils found in the Moroccan part of the Sahara Desert by study co-author Christian Klug, a researcher at the University of Zurich.

The team tested the resilience of the jaws by using a technique called Finite Element Analysis (FEA) to evaluate how likely each jaw was to break when force was applied virtually.

The researchers found that the lower jaw of Titanichthys was much less stress-resistant and much more likely to break compared to the lower jaws of other placoderm species, such as Dunkleosteus. This means that Titanichthys would have not been able to feed on larger prey.

Further analysis revealed that Titanichthys exhibited stress patterns along its jaw that are similar to those found in the suspension-feeding basking shark.

“Our methods could be extended to identify other such species in the fossil record and investigate whether there were common factors driving the evolution and extinction of these species,” said Coatham.

“We suggest a link between oceanic productivity and the evolution of Titanichthys, but this should be investigated in detail in the future. An established link could have implications for our understanding of the conservation of modern suspension-feeders.”