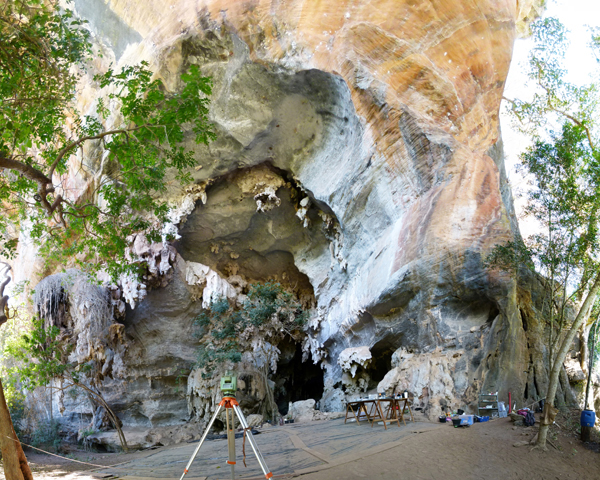 When researchers work to piece together the origin stories of our ancient human ancestors, they can only go so far with the remains and artifacts that have been excavated from archeological sites. It is nearly impossible to decipher how and when specific regions of the globe were populated without a genome to map.

This was one of the challenges in piecing together the genetic exchanges and population shifts that occurred in Central and South America thousands of years ago because, until recently, the earliest genomes from that region only dated back less than 1,000 years.

An international team of researchers came across a gold mine of genome data from Central and South America, and their findings have uncovered surprising insights about the Clovis culture and the shifts of human populations.

The study, published in the journal Cell, sheds light on two unknown genetic exchanges that occurred between ancient humans in North and South America.

After comparing the ancient genomes to modern genomes from other parts of the Americas and the world, the researchers gained new information about the earlier history of South America.

First, the researchers discovered that there were links to Clovis culture people in Chile, Brazil and Belize from 11,000 to 9,000 years ago.

Clovis culture was the first widespread archeological culture of North America, but this study shows that its influence reached further South than previously thought.

“A key discovery was that a Clovis culture-associated individual from North America dating to around 12,800 years ago shares distinctive ancestry with the oldest Chilean, Brazilian and Belizean individuals,” said Cosimo Posth, a co-lead author of the study. “This supports the hypothesis that the expansion of people who spread the Clovis culture in North America also reached Central and South America.”

Over time the Clovis culture DNA was phased out because it’s missing in present-day South Americans, which means that there was a significant shift in population replacement that began around 9,000 years ago.

Modern South Americans share more in common genetically with the individuals who date back less than 9,000 years.

The researchers also found links between ancient humans from the Channel Islands and the people from the Peruvian Andes.

“It could be that this ancestry arrived in South America thousands of years before and we simply don’t have earlier individuals showing it,” said Nathan Nakatsuka, a co-lead author of the study. “There is archaeological evidence that the population in the Central Andes area greatly expanded after around 5,000 years ago. Spreads of particular subgroups during these events may be why we detect this ancestry afterward.”

The researchers note that there is still much to be learned from the early humans of the Americas and future studies could reveal insights about the earliest migrations of people into Central and South America.

“We are excited about the potential of research in this area,” said Johannes Krause, a co-senior author of the study. “With future regionally-focused studies with large sample sizes, we could realize the potential of ancient DNA to reveal how the human diversity of this region came to be the way it is today.”