Animals consider a range of factors before fighting • Earth.com 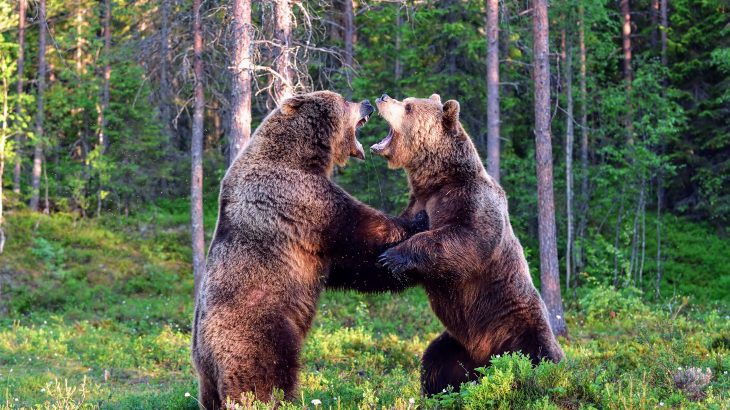 Animals consider a range of factors before fighting

Researchers at the University of Exeter have investigated the dynamics of fighting among animals. The team identified various factors that groups of animals take into consideration before they decide if they are ready and willing to take on their rivals.

When individuals get into one-on-one fights, they look at certain aspects such as the size and strength of their opponent, as well as the outcome of recent fights. At the same time,  the animals weigh the value of the potential reward against the risk that is involved.

According to the study authors, previous research has largely overlooked the complexity of group conflicts. It has been widely accepted that larger groups will win a battle, but this is not always the case.

The researchers explained that factors like the strength of individual members, group cohesion and teamwork, and the location of the conflict are factors that animals use to evaluate the situation.

“Any potential fight – whether between humans or animals – gets more complex if there are multiple individuals on each side,” said study lead author Dr.  Patrick Green. “Groups may assess both the importance of whatever they’re fighting about, and a range of factors about their own group and the opponent.”

“Research on dyadic (one-on-one) fights has developed an advanced framework on ‘assessment’ – how animals gather information and decide whether to fight, how much effort to put in, and if and when to give up.”

“However, studies on group contests among social-living animals haven’t generally focused on assessment. Understanding more about this can teach us not only about evolution, but also about conflict in humans.”

While the larger of two social groups is often dominant in a battle, the study highlights other influential factors as well. For example, smaller groups of grey wolves that have more males can overcome larger groups.

Motivation also plays a role. Meekrats can win fights with fewer grown individuals simply because they are so motivated to gain a better territory for raising pups.

Turtle ants, which have multiple nests, have been observed defending nests that have narrower entrances, suggesting they are willing to fight when the odds of winning are greater.

Studies of chimpanzees show that in times when there is more conflict with other social groups, the males within a group become less aggressive toward each other. This indicates that social cohesion is useful at times when fights are likely to break out.

“Researchers have spent years wondering about the extent to which individual fighting animals use ‘assessment’ – effectively, sizing their opponent up,” said study co-author Professor Mark Briffa. “In this paper, we explore the scope for groups of rivals to do a similar thing.”