Cut and paste: Ants are more impressive than they may appear • Earth.com 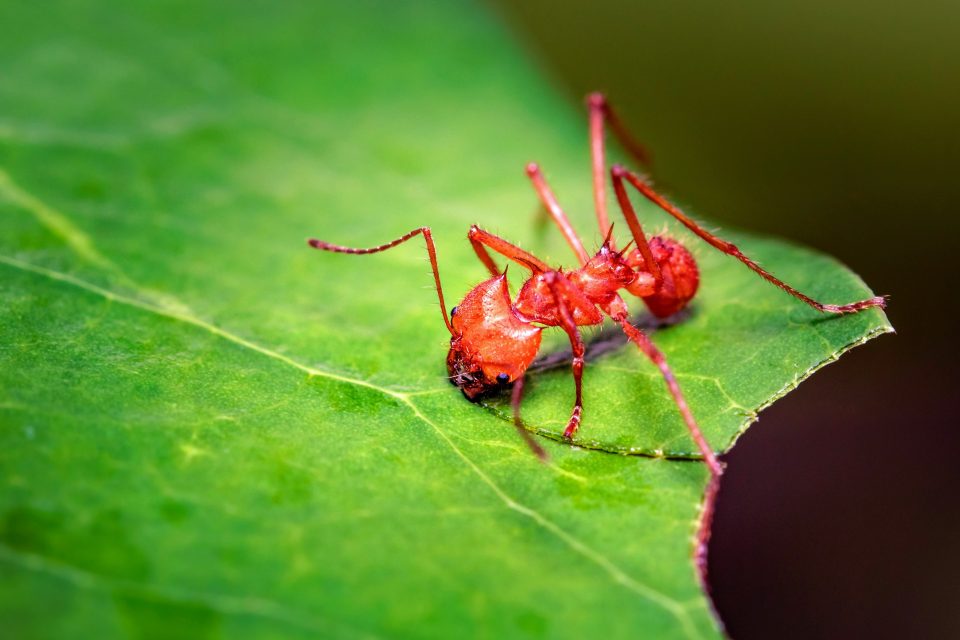 Cut and paste: Ants are more impressive than they may appear

The industry and ingenuity of ants (family Formicidae) have been remarked upon since ancient times. Proverbs, from the biblical to the contemporary, are littered with references to these dynamic and eminently successful insects. With more than 20,000 species, many not even described, constituting perhaps 20% of the world’s animal biomass, it’s no wonder. Or, rather, it’s a wonder of such ubiquity that it is almost banal.

But look even a little bit closer, and the miraculous habits of these eusocial insects shed their prosaic associations and provide startling and wondrous insights into the evolution of sociality, among other phenomena. The fungal agriculture practiced by ants of the tribe Attini is among the most-studied and most astounding of the many innovations developed by the Formicidae.

The 13 genera of Attini contain in excess of 250 species, spread across the Americas from chilly central Argentina to the temperate southern Midwest and East Coast of the United States. Their farming abilities have arisen in only two other groups of insects, termites and ambrosia beetles, a type of weevil. The highest concentration of species is found in the rainforests and plains of South and Central America. The ability to grow fungi for food appears to be an ancient one. According to recent phylogenetic analysis, ants developed this capability some 60 million years ago in the wet rainforests of South America, following the K–Pg extinction believed to be caused by the Chicxulub meteor impact.

How they first stumbled upon this unique means of subsistence is the subject of much debate and theorizing. Some have speculated that ancestral species first began harvesting fungus from stores of seeds that accidentally went bad. Others contend that ants inhabiting rotting wood came to depend on the fungus that grew on the feces of other wood-dwelling insects. Still others believe that mycorrhizal fungal symbionts of plants were the progenitors of modern-day ant fungal crops or that debris piles in ant nests first produced edible fungi.

Now, the ants rely on this mutualistic association for survival. The fungi are transferred by natal queens to their new colonies in a specialized buccal pouch. Supplied daily with new fertilizer by the ever-increasing population of gardeners birthed by the queen, the fungus soon grows to occupy a whole underground chamber, or in some species, many of them.

Because most cultivate only one type of fungus, it must be assiduously weeded to prevent invasion by parasites, notably other fungi, such as Escovopsis. Though they manually remove spores from undesirable species, fungus-growing ants also appear to apply fungicide produced by Pseudonocardia bacteria living on the cuticle of their exoskeletons. The ants also maintain associations with nitrogen-producing bacteria, suggesting that these systems, which are studied for applications such as fuel production in bioreactors, possess even further layers of complexity. Whatever the provenance of this adaptation, it today appears in many forms, from the relatively primitive to the highly advanced.

The 8 so-called primitive or basal genera, which constitute the majority of the tribe, retain the habits of the ancestral type. They typically live in smaller colonies, of perhaps a few dozen to maybe a thousand individuals and do not typically have the specialized worker castes of their more derived brethren. They cultivate their fungal gardens on dead matter—caterpillar frass (excrement), fallen leaves, flower parts, pieces of fruit. (For this reason, some species are invaluable dispersers of seeds.)

Some also collect insect parts, though it is not known whether these actually fertilize the fungi as plant matter does or if they merely provide a surface on which to grow it. The founding queen of a colony will sometimes use her natal wings as the initial reservoir for her fungal garden. Observers who have opened the nests of these species describe a bizarre, sparkling array of iridescent fly and beetle parts festooned with fungal hyphae.

“The tiny ant, a creature of great industry, drags with its mouth whatever it can, and adds it to the heap which she is piling up, not unaware nor careless of the future,” notes Horace in his Satires. Though he would not have encountered the New World fungus-growing ants, this statement seems particularly appropriate for them.

Though most Attini species cultivate fungi of the basidiomycete family Lepiotaceae, a few of the primitive ants of this group also grow members of the coral mushroom family Pterulaceae and others grow yeasts. They are considered primitive in part because the species of fungi that they cultivate are also found in the wild; that is, the fungi may be found in surrounding leaf litter and soil as well as in the nests of the ants.

Their more advanced relatives, the higher attines, split off from the family tree some 30 million years ago after a period of cooling climate. Because they expanded into drier habitats such as savannah and desert, their mutualistic fungi became reliant on them for care and are not found outside of ant cultivation. Though it also occurs rarely on the fungi grown by lower attines, all higher attine fungi produce gongylidia, swollen tips at the end of the hyphae that are rich in nutrients and that are the ants’ main food source. The 5 genera of higher attines include some rainforest members and comprise those found outside of the rainforest, at the northern and southern reaches of their range, where they are often forced to migrate their gardens to more hospitable chambers higher or lower in the soil depending on the season.

The most charismatic and well-known of this group are the leaf-cutter ants, the nearly 50 species in the genera Atta and Acromyrmex. These are the impossibly balanced creatures seen toting massive clippings from living leaves back to their nests. Indeed, the herculean nature of this feat, which may see a worker clasping a leaf fragment many times its length and carrying it vertically, have led to studies by scientists intrigued by their seemingly gravity-defying biomechanics. Shorter clippings are held more horizontally and longer ones more vertically, to balance the load as the creature adjusts its normally tripod gait to avoid toppling. Once back to the nest, the leaves are successively broken into smaller and smaller pieces, the smallest of which are chewn into wads and dosed with a drop of ant feces laden with enzymes to aid in decomposition. These little parcels are then seeded with hyphae from the existing fungus and added to the farm.

In addition to being the only species to use material from live plants, leafcutters are also unique in their development of specialized castes of workers. The tiny “minim” caste cares for the young, tucked into the fungal garden, and performs such various tasks as maintaining pheromone trails and defending their larger foraging sisters, the “media,” from parasitic flies. The “majors” are the soldiers, whose intimidating armature and powerful jaws defend the colony from attack. In some species, there may be as many as 7 unique variations. Despite their tiny size, leaf-cutting ants are usually the dominant herbivores in their ecosystems. One study found that leaf-cutting ants alone consumed some 25% of the biomass that ungulates on a comparable patch of African savanna did in a year. This can make them intimidating agricultural pests, especially as colonies of some Atta species may number in the millions; only a few species are truly problematic.

The outsized impacts of ants have led some to characterize colonies as super-organisms. The agricultural and organizational accomplishments of the fungus-growing ants almost make that seem like an understatement.