How the asteroid that killed the dinosaurs formed such a unique crater • Earth.com 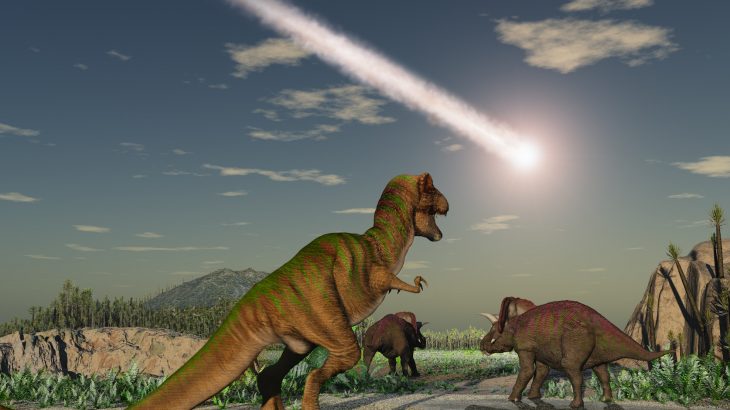 The asteroid that wiped out the dinosaurs 60 million years ago left behind a crater so massive that it measures over 115 miles in width.

This crater, called Chicxulub, is buried by rocks beneath the Yucatan Peninsula of Mexico, and it’s the only crater on Earth with a peak ring consisting of broken rock fragments surrounding the crater.

When an asteroid as big as a city crashes into Earth, like the one that formed Chicxulub, the resulting crater is so large that it’s usually very unstable and collapses.

The impact is also so forceful it can vibrate the surrounding Earth and rocks to such a degree that they move like liquid, forming a peak ring.

Now, for the first time, an international team of researchers drilled deep below the ocean floor to better understand how Chicxulub’s peak ring was formed.

A study, published in the journal Nature, sheds new light on the moments following the asteroid impact that caused the mass extinction event.

How exactly powerful vibrations cause rocks to move in such a fluid like way has been a topic of some debate.

The research was only possible thanks to the efforts of the International Ocean Discovery Program which drilled a mile deep into the Earth and produced core samples that were six inches in diameter.

“What we found in the drill core is that the rock got fragmented,” Ulrich Riller, an author of the study, told the BBC. “It was smashed to tiny little pieces that initially are millimetre sized; and that basically causes this fluid-like behaviour that produces, in the end, the flat crater floor, which characterises Chicxulub and all such large impact structures, including those we also see on the Moon.”

After examining the core samples and rock fragments, the researchers found that a process called acoustic fluidization forced the rocks that collapsed inward after the asteroid strike to rise in the center and form a mountainous ring.

“For a while, the broken rock behaves as a fluid,” said Jay Melosh, an author of the study. “There have been a lot of theories proposed about what mechanism allows this fluidization to happen, and now we know it’s really strong vibrations shaking the rock constantly enough to allow it to flow.”

To put the forceful vibrations in perspective, Sean Gulick, a member of the drill team, told the BBC that the amount of energy moving through the rocks after the asteroid struck was equivalent to ten billion Hiroshima bombs.

The study gives researchers a better understanding of the mechanic of forceful asteroid impacts which are present on many planets and moons in our solar system.

“These findings help us understand how impact craters collapse and how large masses of rock behave in a fluid-like manner in other circumstances, such as landslides and earthquakes,” said Melosh. “Towns have been wiped out by enormous landslides, where people thought they were safe but then discovered that rock will flow like liquid when some disturbance sets a big enough mass in motion.”