Birds follow their noses with a highly developed sense of smell • Earth.com 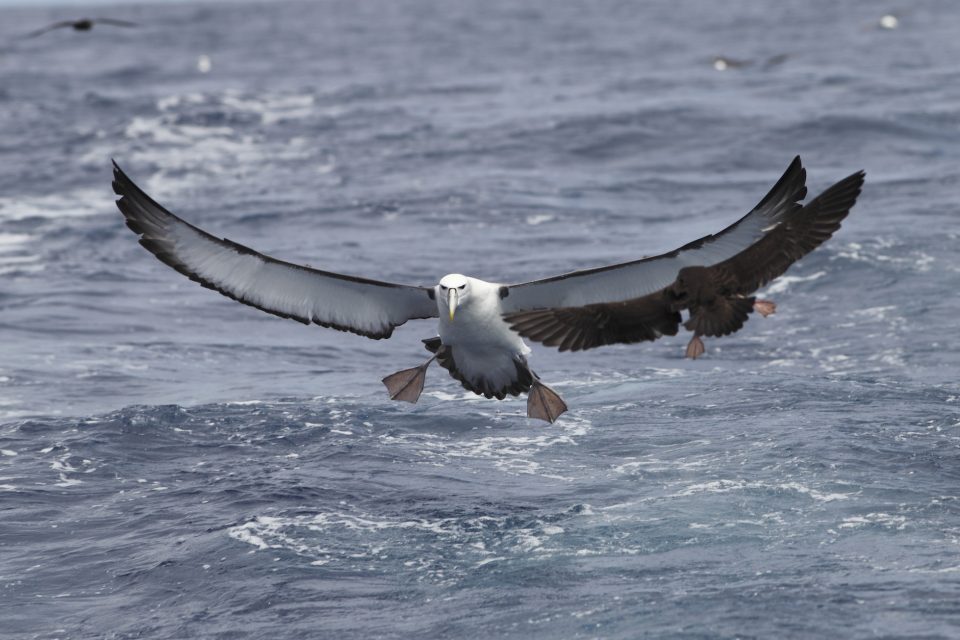 Birds follow their noses with a highly developed sense of smell

Birds can’t smell. It’s one of those myths that has persisted not only in popular science coverage, but in the academic community as well. Some blame that paragon of ornithological observation, John James Audubon.

In 1826, the famed scientist and illustrator conducted a series of experiments intended to discern whether or not turkey vultures (Cathartes aura) located carrion by sight or by smell. He fashioned a model “carcass” out of a deer skin stuffed with grass. Presumably scentless, the dummy deer nonetheless attracted a vulture, which quickly decamped after investigating and finding it devoid of anything edible.

Audubon then hid a putrescent hog carcass under a pile of brush; no vultures alit to partake in the fly-blown flesh despite what one assumes was a powerful odor. The fact is, nearby vultures probably did smell it…and that’s why they didn’t come flapping down to devour it. As it turns out, turkey vultures, contrary to their perception as undiscerning gluttons for anything rotten, prefer relatively fresh corpses. 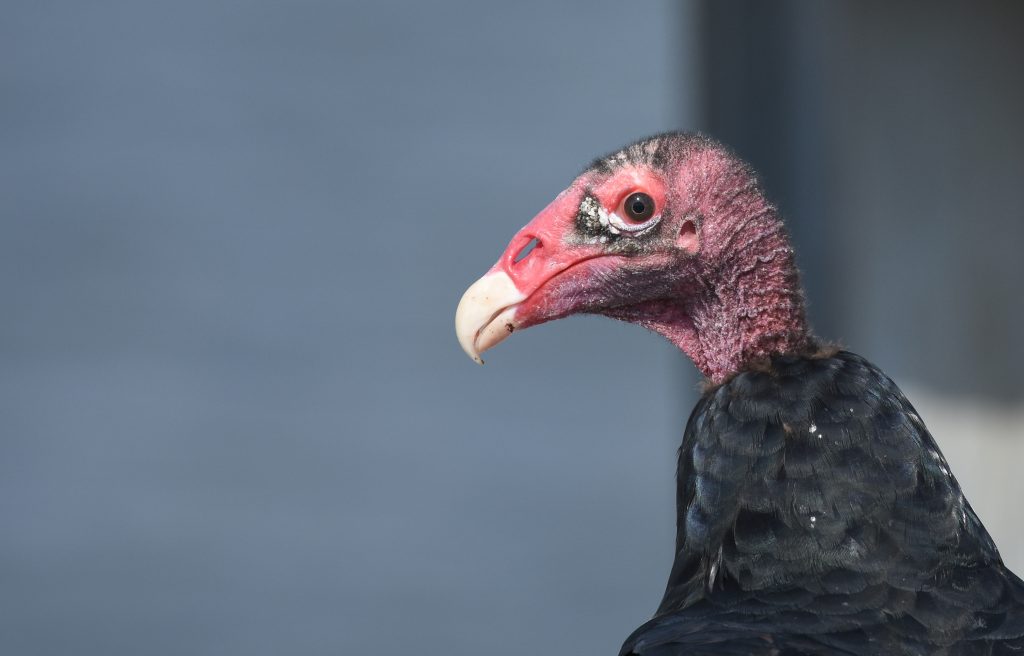 Despite his misguided conclusions, though, the idea of the anosmic, or un-scented, bird probably wasn’t Audubon’s fault after all. The real reason that avian olfaction has historically gotten short shrift is likely the fact that ornithological research has focused on bird’s other sensory capabilities, notably sight and hearing, thus prejudicing perceptions of its other senses. Why would animals with such highly evolved visual and auditory abilities need an acute sense of smell as well?

In many species, especially those that are flighted, scent would seem to be an afterthought…intuitively, it wouldn’t be useful to animals who spend their time aloft, where scents vanish as quickly as the winds that bring them. So, too, birds lack the vomeronasal organs used by many mammals and reptiles to detect pheromones, suggesting that scent plays little role in social signalling.

Despite Aubudon’s skepticism, there are plenty of indications that other early natural observers did suspect that birds could smell. A poem dating to 280 AD references the ability of the woodcock (Scolopax sp.) to smell its prey and an aviarist of the early 19th century notes the ability of his woodcocks to sniff out morsels as well. A journal entry from a Portuguese missionary dating to the 1500s notes that honeyguides, which feed on beeswax, were able to locate candles made of the substance by scent alone. By the early 20th century, it was known that many species of bird had sizeable olfactory bulbs, strongly suggesting that they possessed some sense of smell.

Since the 1960s, further experimental evidence has thoroughly verified these suspicions. Notably, ornithologist Betsy Bang studied morphological features in numerous species of bird, in particular the nares, or nostrils, and the olfactory bulb. Her findings reinforced previous studies on bird brains…the olfactory bulb, responsible for processing scent inputs, was just too large to be non-functional in many birds.

Another ornithologist, Kenneth Stager, arrived at more definitive proof that turkey vultures in particular were flying scenthounds in 1964. In talking to engineers who managed natural gas pipelines, he learned that turkey vultures had been known to congregate at leaks in the pipes since the 1930s. It was at this point that petroleum companies had begun introducing a gas known as ethyl mercaptan to the lines, so that people could smell when natural gas, itself a dangerous but odorless compound, was leaking. This is the scent you’ll notice when the pilot light on the stove goes out and gas escapes into the room unburnt. The substance is also given off by decaying bodies. Thinking that they had found the mother of all carcasses, turkey vultures would come zooming in to the site of the leak from miles around. Since it seems unlikely that they would confuse an oil pipeline for a meal visually, it is clear that they were attracted by the scent. More recent research has built upon these findings.

A 2008 study found strong correlations between the numbers of olfactory receptor (OR) genes in a birds’ genome and the size of its olfactory bulb. Intriguingly, while even mammals do not always have a full complement of functional OR genes, nearly all of them were functional in the birds examined in this study.

In 2011, an exhaustive comparative study of the skull structures of fossil theropod dinosaurs—from which birds evolved—as well as those of extinct and living bird species, found that in fact olfactory bulb size had increased as birds diverged from dinosaurs, indicating that smell became more important, not less. This notion was further refined in a 2016 study, which found that OR genes involved in detecting hydrophilic, or waterborne, chemicals, were more active in seafaring species and OR genes geared toward sensing volatile compounds were prevalent in terrestrial birds. The correspondence of genes coding for the detection of scents most common in a given species’ environment further solidified the utility of scent perception. Indeed, lifestyle is a relatively accurate predictor of avian olfactory sensitivity.

Olfaction appears to be most acute in ground-dwelling, nocturnal birds such as kiwis and kakapos, who likely compensated for their diminished vision by adapting highly sensitive noses. Kiwis are known to snuffle about on the forest floor like hedgehogs, using their powerful noses to locate insects and other treats. The Procellariformes, or tube-nosed birds, which include seabirds such as albatrosses, petrels, and shearwaters, are also highly sensitive to certain odors. At sea for the majority of the year, these birds have come to rely on scent to locate food and to navigate home over the apparently featureless waves.

In a 2017 study, scientists temporarily eliminated the olfactory capabilities of a group of Cory’s shearwaters (Calonectris borealis) using a chemical treatment. The birds were then released and their movements were tracked. Unlike their counterparts who retained their sense of smell, their navigation patterns to and from their nesting sites were strangely linear. Birds who were able to smell used a zig-zag pattern, suggesting that they were following scent gradients back to their colonies. The anosmic birds appeared to fall back to purely visual modes of navigation, which, it turns out, are less efficient. Additional studies have found that many procellariforms, and other seabirds, are attracted to dimethyl sulfide, a compound released by dying or stressed phytoplankton, which suggests the presence of other animals, such as krill, feeding upon them. These birds eat krill and other species that rely on phytoplankton and so follow the odor gradient until they reach areas of high plankton density, where their prey aggregates.

Scent appears to play a role in mating for some species as well. Mallard ducks (Anas platyrhincus) produce certain compounds in their uropygial glands, the source of the oil used in preening, only during the mating season, indicating that there may be a role in attracting mates or signaling receptivity. Male Japanese quail (Coturnix japonica) whose nostrils were blocked with dental cement exhibited different brain activity while copulating than those with unblocked nostrils, indicating that scent may play a role in sexual interaction.

Remarkably, the odor produced by the crested auklet (Aethia cristatella) only during its breeding season can be detected by humans—who contend that it smells like tangerines. These birds conduct mating rituals that involve nuzzling each other’s necks, where the glands that produce the scent are located. Because these compounds are also thought to repel ticks and other parasites, the strength of this scent may be an indicator of evolutionary fitness and allow females to select an ideal mate partially on the base of his odor. Even the adorable kakapos possess a musky odor all their own—apparently quite pleasant to human nostrils— and this is thought to have a role in mate selection as well.

Some species also appear to use scent as a means of predator detection. House finches (Carpodacus mexicanus), which have relatively small olfactory bulbs, were found to avoid the scent of predators. So were starlings and blue tits. In contrast, kiwis and kakapos were found to be unable to distinguish the scents of introduced predators, leading some to conclude that this may be one reason they are so vulnerable to such invasives as rats and weasels. Though their powerful olfactory sense probably does pick up the stink of weasel or rat urine, they simply haven’t yet learned to associate these odors with danger. Other songbird species use aromatic herbs and even cigarette butts to repel parasites from their nests. In order to select the most useful plants, they must possess some ability to smell them.

All of this compounded data indicates with certainty that olfaction plays an essential role in the life history of many birds. One question, though, remains unanswered: when you’re a bird, do humans stink? Based on personal experience, I am going to hypothesize that yes, yes they do.