Black-eyed peas could reduce the need for fertilizer • Earth.com 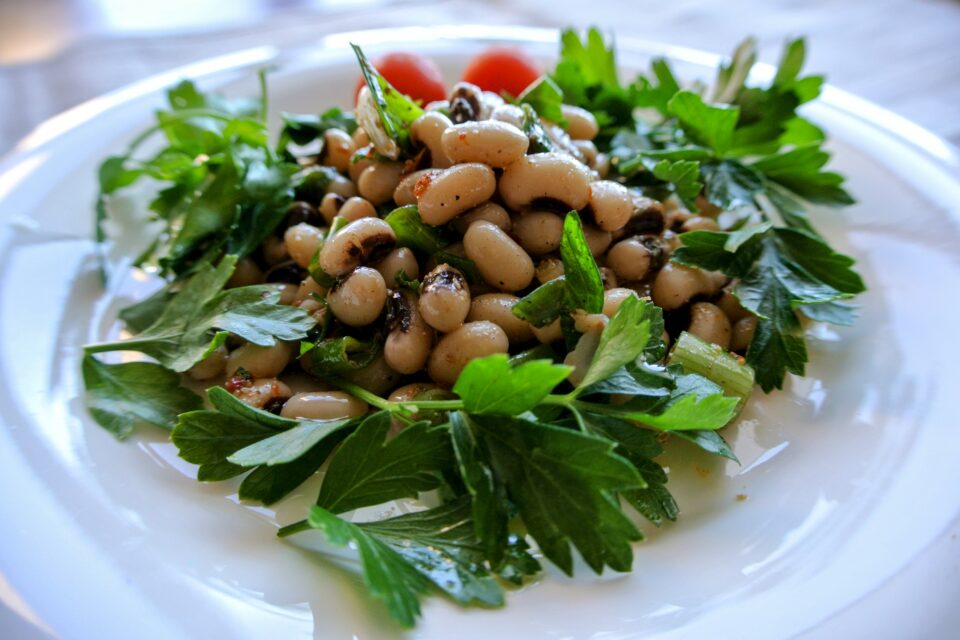 In a recent study from UC Riverside researchers investigated whether black-eyed peas had lost any of their ability to attract Bradyrhizobium (nitrogen-fixing bacteria from the soil) and establish them inside nodules in the roots. As black-eyed peas are an important crop in many parts of the world, this ability may have been lost during domestication or selective breeding over centuries.

All plants need nitrogen in order to form the proteins needed for growth. If there is not enough nitrogen present, plants will not grow successfully. Although the atmosphere contains around 80 percent nitrogen gas (N2), plants cannot use it in this form. Instead, it has to be “fixed” into the form of ammonia (NH3), nitrate (NO3–) or nitrite (NO2–). It is most often bacteria in the soil that fix nitrogen into these forms, thereby making essential nutrients available for absorption by plant roots.

Legumes, including crop plants such as peas, beans and lucerne, go a step further than this. They attract nitrogen-fixing bacteria by secreting enticing chemicals through their roots. Once bacteria have attached to the root hairs, the plant secretes different substances that the bacteria to enter root hair cells and travel into the main root. Once inside the root, the bacteria cause root cells to divide and form a tumor-like nodule which is where nitrogen-fixing activity can take place.

In the symbiotic relationship that ensues, the legume plants receive a useful, fixed form of nitrogen to use for growth, and the plants provide a supply of carbohydrates to the bacteria, along with a safe place to live.

“The ability of legumes to do this caused them immense success as the third biggest plant family on the planet,” said Joel Sachs, UCR professor of evolution and ecology.

Unfortunately, plant breeders often select intensely for above-ground characteristics of crop plants, such as their yield, disease resistance and protein content, when trying to improve the quality of the plants. They do not focus on the important ability of roots to attract bacteria and enter into a symbiotic relationship with them – something that is essential for the supply of nitrogen to the growing plants.

Study lead author Gabriel Ortiz wanted to find to find out whether modern farming practices had resulted in a loss of symbiotic ability in black-eyed pea plants. In many cases, plants heavily impacted by humans do not benefit as much from relationships with bacteria as their wild relatives do.

The researchers used genome-wide analyses, along with a greenhouse inoculation study, to investigate genomic diversity, heritability, and symbiosis trait variation among 20 different varieties of wild and early-domesticated black-eyed peas.

They found that, although there was evidence that the peas experienced modest decreases in genome diversity during early domestication, they had kept their natural ability to form beneficial symbiotic relationships with nitrogen-fixing bacteria. The experiments even showed that domesticated populations made more root nodules than wild varieties of black-eyed peas.

“In fact, some of the strains in the experiment appear to have gained more benefit from bacteria than their wild ancestors,” Sachs said.

The authors attribute this unexpected result to the fact that black-eyed pea landraces were developed in Africa where the low nutrient conditions would have favored plant genotypes that use symbiosis with nitrogen-fixing bacteria in an efficient manner. This implies that early breeders inadvertently selected for plants with excellent ability to attract and protect these symbiotic bacteria.

“We can use this information in the future to design better performing plants,” said Ortiz. He and his team focused on black-eyed peas because they are also drought tolerant, another important trait for Southern California growers.

Furthermore, farmers can use black-eyed pea crops to enrich their soil with nitrogen, rather than having to add inorganic fertilizer. When nitrogen fertilizer is applied it can end up being carried away with rain water and polluting rivers, lakes and oceans, or it can enter the atmosphere as a greenhouse gas.

“When the plant senses it is going to die, it releases the bacteria into the soil, replenishing it,” Ortiz explained. “Growers could alternate seasons of legumes with other crops, leaving the soil full of nitrogen-fixing bacteria that reduce the need for fertilizer.”

“To make agriculture more sustainable, one of the things we need to do is focus on the plant’s ability to get services from microbes already in the soil, rather than trying to get those services by dumping chemicals,” Sachs said.