Carbon emissions from logged forests are much greater than anticipated • Earth.com 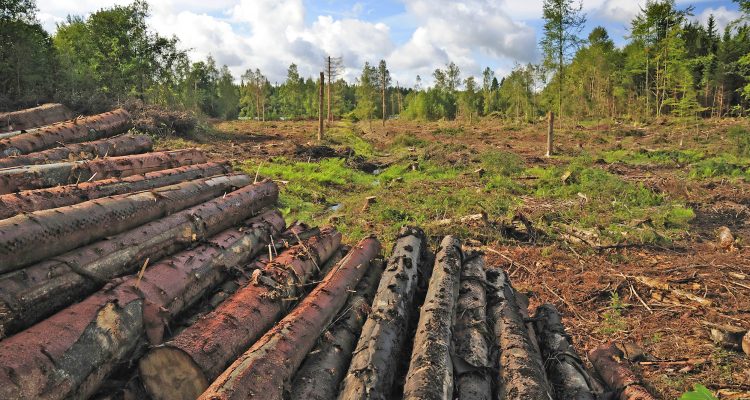 Carbon emissions from logged forests are much greater than anticipated

New study is the first large-scale analysis of deadwood — the woody debris left behind after logging – in Central Africa and its potential impact on global carbon emissions.

Logged forests in Central Africa may contain more than three times as much carbon-emitting woody debris left on the forest floor after logging than previous estimates have suggested, a new Duke University-led study finds.

The researchers measured the debris, known as deadwood, at 47 forest sites in the Central African nation of Gabon.

“We found that selectively logged forests in Gabon contained nearly twice as much deadwood as unlogged forests, and up to 3.8 times more than past estimates indicated,” said John R. Poulsen, assistant professor of tropical ecology at Duke’s Nicholas School of the Environment.

“That’s a huge difference, with broad implications for regional forestry practices and policies, as well as global carbon emissions,” he said.

Vast underestimation of deadwood is likely also to have occurred in forests of tropical America as well, the research shows.

Most models currently used for calculating forest carbon assume that deadwood accounts for about 9 percent of all biomass in forests, Poulsen said. But, based on the new findings, “we need to adjust that figure upward for forests in the humid tropics, to around 30 percent for logged forests and 18 percent for unlogged sites.”

The study, published last month in the peer-reviewed journal Global Change Biology, is the first large-scale analysis of deadwood in Central Africa and currently the largest such study anywhere in the tropics.

The researchers surveyed the volume of deadwood on forest floors at 19 logged sites and 28 unlogged sites across Gabon. To determine the density of the deadwood found there, they cut apart, measured and weighed each individual piece they encountered along straight sampling lines at 16 of the sites.

“It was pretty labor-intensive, but it gave us real, on-the-ground numbers for quantifying the amount of necromass, or deadwood, at the 47 sites. These new numbers reveal how inaccurately low past estimates, which were not based on field data, have been,” said lead author Ben S. Carlson, a 2013 Master of Environmental Management graduate of Duke’s Nicholas School who is now a doctoral student at Yale University.

A similar pattern of inaccurately low deadwood estimates was revealed when Carlson and his colleagues critically examined a large number of earlier, small-scale studies conducted throughout the neotropics of the Americas.

“The results really jumped out,” said Poulsen. “The implication is that not only is deadwood underestimated in Central Africa but it is most likely underestimated in tropical America and quite possible in all of the tropics.”

Most countries in the tropics are required to provide estimates of how much carbon is stored in their forests to qualify for programs run by the United Nations Framework Convention on Climate Change that compensate them for reducing emissions from deforestation and forest degradation.

“Since most of these governments don’t have accurate field data, their estimates have been based on default values of forest carbon in other parts of the world, where necromass-to-biomass ratios are much lower,” Poulsen explained. “This has likely led to vast underestimates of deadwood stocks in humid tropical forests, especially in selectively logged forests, which account for more than 50 percent of all forested lands in Central Africa.”

In other words, he said, “there may be a lot more deadwood on the forest floor, potentially emitting carbon back into the atmosphere, than we previously thought.”