The hidden secrets of the Carlsbad Caverns in New Mexico • Earth.com 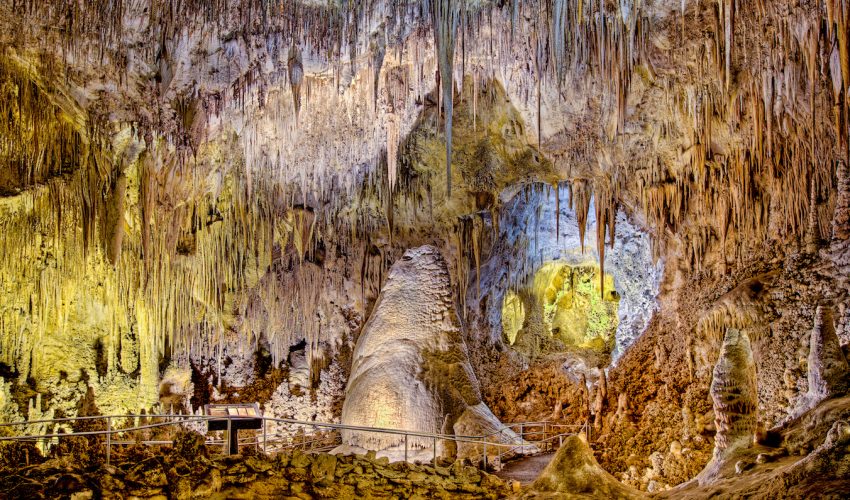 The hidden secrets of the Carlsbad Caverns in New Mexico

Caves are special, mysterious places.  I felt it first when I was very young and visited Jewell Cave in South Dakota.  I felt it again during high school geology class on a field trip to a small show cave in Colorado.  When I first visited Carlsbad Caverns in New Mexico though, I was blown away. Seeing the truly awe-inspiring size and scope of Carlsbad was what first inspired me to try caving.  Will Rogers called the place, “Grand Canyon with a roof on it.”

Above the caves, the boundaries of the National Park enclose an amazing landscape.  On the edge of the Chihuahuan desert that extends south, and on the border of the great plains extending to the east and rugged canyon and mountain country extending to the west, Carlsbad is in a unique position.  The nature of different ecosystems converging in one area increases the biodiversity of Carlsbad Caverns National Park.

Cacti common in the Chihuahuan Desert, extending south deep into Mexico, live in Carlsbad along with desert animals like tortoises, lizards and rattlesnakes.  There are also scrubland plants like juniper, mesquite and the creosote bush which smells of the desert after rain. Rattlesnake springs maintains a small pool of water and water loving species of plants such as willow and cottonwood.

Over 300 bird species have also been noted at Rattlesnake Springs, which is considered an Important Bird Area (IBA).  According to the National Park Service, there are 67 species of mammals found at the park.  There are 17 species of bats found in Carlsbad, including 3 species of free tailed bats.  Two foxes live in Carlsbad and the raccoon resides along with its more mysterious desert relative, the ringtail cat.  55 species of reptile and amphibian have been identified in the park. Three species of rattlesnake a gecko and 8 species of horned or spiny lizards call Carlsbad home.  There are only 5 known species of fish found in Carlsbad but at let 600 species of insect, with new ones being discovered all the time.

There are 85 ‘plant associations’ known in Carlsbad Caverns National Park, 28 of which seem to be unique to the park itself.  Plant associations are unique communities of plants such as grasslands or woodlands. There are at least 900 species of vascular plants in Carlsbad, ranging from ferns, spike-moss and horsetails to 4 species of juniper, 4 pines and even 6 plants in the cashew family.  There is an impressive number of cacti at 25 known species.

Being a place of desert and caves, both habitats known for a distinct lack of life, Carlsbad hides its biodiversity well and holds its secrets close.

Hiking in through the natural entrance gives you the place a certain scope that the quick trip down in an elevator lacks.  The natural entrance seems enormous and as you take steps downward and inward, you can watch the patch of sunlight from outside dwindle to nothing behind you.

The scale of the caverns is hard to explain.  Darkness is the dominant element and the whole place has a slightly hushed feel to it, like a cathedral.  According to US Parks, the Big Room of Carlsbad Caverns alone is approximately the size of 6.2 football fields.  In the main area of Carlsbad, only 3 miles of paved trails is available to visit but more than thirty miles of passages have been mapped to date, according to National Geographic.  The less accessible Lechuguilla Cave which is also part of Carlsbad Caverns National Park has over 134.6 miles of passageway surveyed and rooms half as tall as New York’s Chrysler Building, according to Live Science.

Carlsbad Caverns National Park is made up of over 119 caves buried below the Chihuahuan desert.  The geology of area is composed of an ancient reef system, the Capitan Reef which was mainly sponges and algae in a shallow sea 265 million years ago.  The reef system created large deposits of limestone out of which the famous caverns are carved.

The subterranean geology of Carlsbad is so hidden that it wasn’t until a local cowboy, Jim White was chasing cattle in 1898 and saw a swarm of bats which from a distance appeared to be a giant plume of smoke erupting from the desert.  Jim rode closer and then walked towards a gaping hole in the earth. He described the moment when he discovered Carlsbad Caverns, “I found myself gazing into the biggest and blackest hole I had ever seen, out of which the bats seemed literally to boil”.

Jim returned a few days later with a rope, wire and a hatchet he used to make a ladder with and began the still ongoing work of exploring the caves.

In the early days Jim White, lowered visitors into Carlsbad Caverns in a large bucket tied to a bucket used to collect guano.  Guano was mined and sold to citrus farmers in California to be used as fertilizer. It wasn’t until 1923 that Carlsbad was turned into a National Monument and 1930 that the National Park was created.

Once the caves were dry and relatively empty, formations: enormous stone columns, sharp stalactites and smooth flowstone formed over millions of years, by minerals deposited tiny drip by tiny drip.  Erosion and collapse of the cave created Carlsbad’s natural entrance, letting air into the cave and allowing the chemistry that created beautiful cave formations. Columns now appear like massive candles where melted limestone stands in for wax.  Side passages open, bristling with a thousand sharp projections like the stone fangs of some monstrous mouth. Shadow and light play over an alien landscape ready to be painted by the imagination.

Today, Carlsbad Caverns is home to more than 250,000 Brazilian Free-tailed Bats.  Along with the bats, a colony of cave swallows also lives near the natural entrance of the cave.  Three species of cave adapted crickets live within the caverns, eating fungi and algae as well as providing food for others by being eaten along with their eggs and dung.  Beetles, millipedes, centipedes and other arthropods live in or around the cave, feeding on cave crickets. In the dark there are probably many other species of arthropods hiding.

In other caves in the southwest, pseudoscorpions (similar to scorpions but without a tail), centipedes and spiders have been found adapted to and living in caves.  Cracks, small passages and undiscovered rooms are all places new species can hide. Even turning over and looking under small rocks on a cave floor can reveal new animals to science.

In a place like Carlsbad Caverns, the possibilities are endless.  It’s uncertain how many caves there actually are or if caves now known might someday be found to connect to each other.  Cave exploration can’t be done with satellites or GPS, but must like the old days be carried out largely by people under their own power creeping into the unknown.  Research on strange bacteria is being carried out in Lechuguilla Cave in Carlsbad. Exploration is active and ongoing throughout the park. Even above ground new species of insects are commonly found.  For the visitor, Carlsbad is a glimpse into the unknown, a reminder that the world is still often wild and strange.