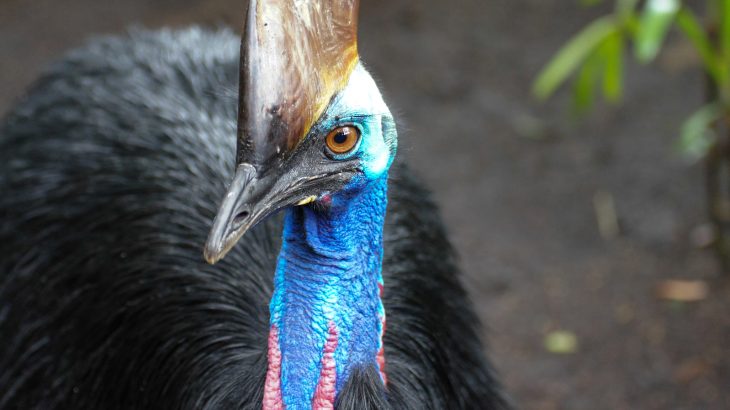 Cassowaries are billed as the world’s most dangerous bird, and it’s a reputation that has been well earned. More than most birds alive today, cassowaries bear a striking resemblance to extinct dinosaurs.  The feet of cassowary have nasty claws that can grow to five inches long and echo the feet of dinosaurs.

It isn’t particularly surprising that a bird as fearsome as the cassowary, an animal that can reach over six feet in height, can kill a full grown human.  Actually, under normal circumstances, ostriches and cassowaries are the only birds confirmed to have killed people. In a bizarre incident, The Guardian reports that a man was killed by a wound from a knife attached to a rooster at an illegal cock fight.  Despite the potential for fatalities, there are only a few reported deaths caused by cassowaries, according to Scientific American.  Most of these deaths have happened when a person fell down while fleeing a cassowary or were crouched when attacked.  In the case of a recent death in Florida involving a cassowary, this seems to likely have been the case.

Marvin Hajos, a 75 year old collector of exotic wild animals, was found dead recently.  Hajos was found by rescuers lying dead between two cassowary pens. It appears that Hajos died from injuries inflicted by his captive cassowary, according to Orlando Weekly.  Soon after Hajos death, the cassowary and several other exotic animals he owned were put up for auction by Gulf Coast Livestock Auction.

The auction included lemurs, zebus, several marmosets, many parrots and other birds, tortoises and others.  Many of these animals are threatened in some way by the exotic pet trade. On the list is a Cuban Amazon, a small parrot native to parts of the Caribbean.  I spent a summer monitoring nests of the Cuban Amazon and know the disappointment of discovering that parrot chicks have been stolen to be sold on the black market.

Despite the death of the owner, which is unusual, the case brings to the public’s attention the downside of owning exotic pets.  Wild animals are inherently different from domestic pets like cats and dogs. Animals like cassowaries may not typically kill you but they can be unusually tough to care for.  Mostly animals die from inadequate care but sometimes a creature that appeared cute as a baby may grow to enormous proportions and be turned out into the wild.

Sometimes exotic wild animals released in places like Florida become invasive and cause problems for native species.  Burmese pythons, for instance, have breeding populations in the Everglades where they compete with and prey on native animals.  Even worse, as recently as 2016, USA Today reported that Nile Crocodiles were confirmed to now live in Florida.  Nile Crocodiles are native to Africa, where they are known to be more aggressive than Florida’s two species of crocodilian.  Sometimes Nile Crocodiles kill and eat people. It’s generally considered impossible that the Nile Crocodiles made their way to Florida unaided.  Instead, the most likely scenario is that an exotic pet trader smuggled the crocodiles to Florida.

AP News reports that three Nile crocodiles found were related but weren’t from any legally licensed wildlife attraction.  It’s impossible to know if more Nile Crocodiles are lurking somewhere in the Florida Everglades but if there are, they could cause real problems.  Nile Crocodiles could possibly hybridize with the native, American Crocodile, a species that’s never caused a confirmed human death. Invasive species cause problems all over the world but seem to take hold more often in warm, wet places.

According to the Florida Museum, invasive species have been introduced to southern Florida as far back as 1800 and the problem only continues to grow.  Fish, snakes, even parrots and eels have been found in the Everglades. Populations of feral hogs live in Florida as well as many places in the Caribbean.  South Florida Sun Sentinel reports that there are at least 500 invasive fish and wildlife species now living in Florida, including monkey colonies.  These animals disrupt Florida’s ecosystem and hurt native species. Often the exotic pet trade also hurts the survival in the wild of animals sold.  In rare cases, exotic pets like cassowaries also threaten the lives of their owners.

In 2017, AOL reported that a British man was strangled to death by his pet python.  Wide Open Spaces reported in 2015 that a Texas man who collected exotic species was gored to death by a European Red Stag he kept.  Some animals like bears seem to be obviously poor choices for pets, yet CBS News reported in 2009 on the case of a woman mauled to death by her pet bear.  The Guardian reported on a case of a man who kept a hippopotamus, the most dangerous animal in Africa, and was subsequently killed by it.  Pet camels, lions, wolf-dog hybrids and cobras have all been attributed to the death of their owners.

Humans often have a sense of superiority that can get them into trouble.  The hubris that we can control nature doesn’t stop with dangerous pets. Each species must see the world differently than we do.  For us to assume we understand another’s intelligence is a great example of hubris. Like all hubris, the imagined control of a wild creature is a dangerous one that can even lead to death.  Of course, this type of hubris can also endanger entire species or even ecosystems. Maybe we can all learn a bit from these tragedies.