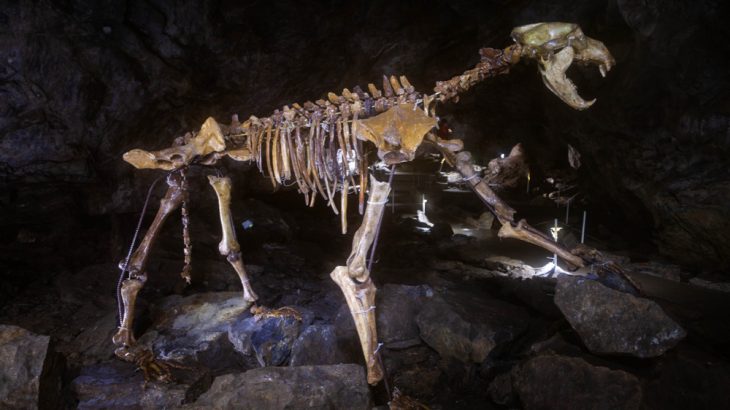 In prehistoric Europe, cave bears lost out to invading humans

Enormous cave bears roamed throughout prehistoric Europe for more than 100,000 years, munching on the plant life that grew on the continent.

All that changed when modern humans arrived in the region. A new genetic study hints that humans played a large role in cave bears going extinct.

The cave bears – about the size of a modern grizzly – died off during the last glacial maximum about 26,000 years ago. That led some researchers to suspect the ice age led to their extinction, but new research indicates that humans may have left the population weak and vulnerable.

The clue was in the bears’ DNA. Dr. Verena Schünemann of the University of Zurich and a team of researchers studied mitochondrial DNA from 123 different bears. They discovered that, about 40,000 years ago, the genetic diversity of the species dropped drastically, pointing to a declining population.

“There [were] still a few around, but there is this massive loss of diversity,” Schünemann said.

The decline came right around when modern humans moved into Europe, displacing the Neanderthals that lived alongside the cave bears. The researchers suspect that they claimed the caves where the bears hibernated, leaving them homeless. Since the bears preferred caves near the plants they are, this may have also cut them off from abundant food sources.

“If they lose that, they also lose their feeding possibilities,” Schünemann said.

That shrunken population – with fewer opportunities for food and shelter – simply couldn’t survive the frigid climate, even though they’d survived cold periods before, the researchers believe.

“They might have survived if there wasn’t this decline before,” Schünemann said.

The extinction of the cave bears is the clearest European example of modern humans wiping out a megafauna species, the researchers said.

The researchers’ work has been published in the journal Scientific Reports.