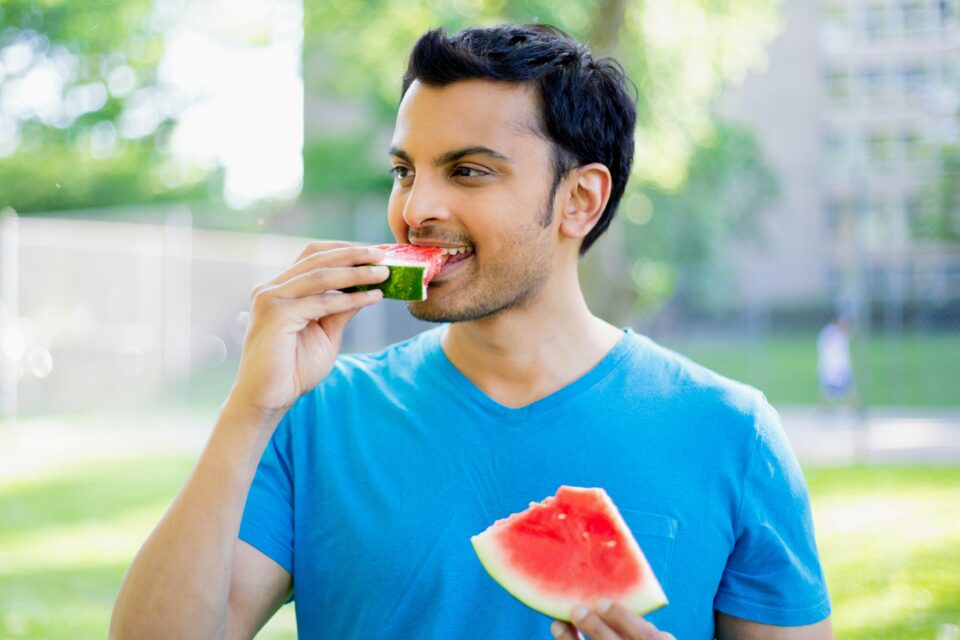 It may sound counterintuitive, but each time you eat food your body’s metabolic rate increases and you use up extra energy. So, in response to consuming calories, your body begins to use more calories. This is because food needs to be broken down, digested, absorbed and transported to various places in the body for storage. All of these processes require energy.

Although some of the energy generated by your body is used up in the digestion of your food, there is also heat produced each time you eat. This is known as diet-induced thermogenesis (DIT), or the thermic effect of food, and is defined as the amount of energy expenditure, above the basal metabolic rate, that is due to the cost of processing food for use and storage. A common estimate is that around 10 percent of the calories you consume in food will be used up in the processing of that same food.

Interestingly, previous studies by Dr. Yuka Hamada and Professor Naoyuki Hayashi from Waseda University have shown that eating slowly and chewing food thoroughly further increase the energy expenditure associated with the processing of food, as well as stimulating intestinal motility – all of which increases heat generation in the body after food intake. These findings have relevance for people wishing to maintain their weight or, indeed, to lose weight.

However, the findings of these earlier studies were complicated by the fact that the influence of the size of the bolus (swallowed lump of food) and the “lumpiness” of the food were not taken into consideration.

“We were unsure whether the size of the food bolus that entered the digestive tract contributed to the increase in DIT observed after slow eating,” explained Professor Hayashi. “Also, do oral stimuli generated during prolonged chewing of food play any role in increasing DIT? To define slow chewing as an effective and scientific weight management strategy, we needed to look deeper into these aspects.”

In their recent study, published in the journal Scientific Reports, the scientists designed new experiments that excluded the effect of the food bolus by using liquid food. Their aim was to find out whether oral stimuli generated during prolonged chewing of food had any influence on the increase in metabolic rate that follows the ingestion of food.

The study involved 11 adult male volunteers, each of whom went through three eating trials while various aspects of their physiology, metabolic rate and circulatory systems were monitored.

In the final trial, the effect of both tasting and chewing were assessed. In this third test, conducted after another break of at least three days, the volunteers had to “chew” each sample of liquid food for 30 seconds (at a rate of one chew per second) before ingesting. In each trial, a total of 200 ml of liquid food was swallowed and the effects on variables such as DIT, hunger, fullness, gaseous exchange and circulation were measured.

The results showed that several metabolic and physiological measures were significantly affected by prolonged tasting and chewing of food. In particular, DIT increased significantly when food was tasted and when it was chewed for prolonged periods.

In addition, circulation in the celiac artery increased with taste stimulation and with chewing. This artery supplies blood to the liver, stomach, abdominal esophagus, spleen, and the superior halves of the duodenum and the pancreas, and so the motility of the upper gastrointestinal tract was increased by taste and chewing.

The results also showed that protein oxidation was significantly greater in the chewing trial than in the control trial, at 45–60 minutes after the test drink. This indicates that chewing helps to speed up and increase the digestion of proteins in particular. Fat and carbohydrate oxidation did not differ significantly between the trials.

“While the difference in energy expenditure per meal is small, the cumulative effect gathered during multiple meals, taken over every day and 365 days a year, is substantial,” concluded Hayashi.