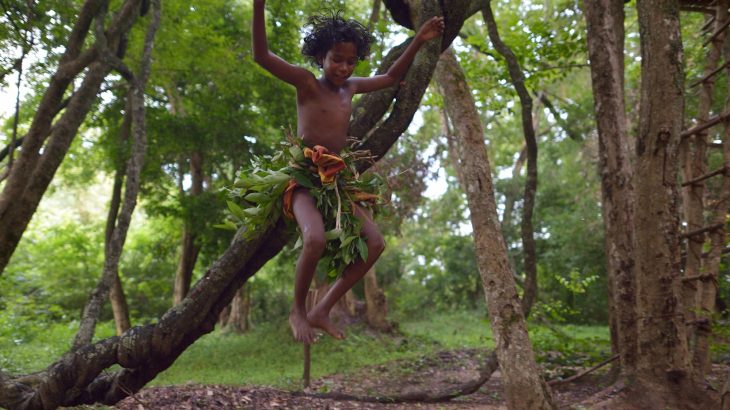 Stories of children raised by animals have long existed in media, myths, and folklore. Children like Mowgli or Tarzan were raised by wild animals in the jungle, while Remus and Romulus suckled on the milk of wild wolves.  There are myths in the Amazon of people who change into jaguars and in the Arctic there is a myth of a woman who marries a brown bear. The idea of an impenetrable barrier between humans and animals seems to come from the monotheistic tradition and historically seems to be in the minority of beliefs worldwide.

But today it seems that the accepted belief is that in some way, humans and other animals are fundamentally different.  Even as some evolutionary biologists attack the belief of human exceptionality, we continue to act as if we are superior to all other life forms.

The idea of children growing up in without humans, more influenced by other animals than their own species, seems initially hard to believe.  As wild as it may seem, beneath the fiction of myth and legend, is a hard seed of reality. Children left without human companionship at an early age are left growing up without language or basic knowledge of human society.  These children are known as feral, wild or properly referred to as ‘isolates’ and there are several historical examples.

Marina Chapman is unusual among ‘feral’ children in that she grew up to have a relatively normal life as an adult.  Also true to many fictional renditions of the story, Marina was befriended by non-human primates, in her case a troop of Capuchin Monkeys.  At around 4 years old, Marina claims she was abandoned in the jungle of Columbia, where she survived by following monkeys and learning from their behavior.  By the time Marina was found by hunters perhaps five years later, she seemed to have no human language. After her time in the jungle, Marina was sold into prostitution, escaped to live on the street as a pickpocket hiding from police in trees and again captured as a slave by the mafia. Eventually, Marina was rescued and moved to England with her husband where she lives today.  It’s a hard story to believe and many are skeptical about it. Marina Chapman wrote a book about her experience but for many it’s still too much to swallow.

More convincing is the case of John Ssebunya, a man who witnessed his father murder his mother at the age of two or three years old and escaped into the jungle of Uganda.  John told his story in an interview given through translator with The Guardian.

John recounted how vervet monkeys eventually befriended him, giving him nuts and tubers for food.  Living in an area torn by civil war, John encountered no humans and learned to survive by following and observing the monkeys.  After years in the jungle, John was eventually found by a woman named Millie, who thought he was an injured monkey at first.

Scientists who tested John by placing him with monkeys feel his interactions with them are convincing, and report that he seems to act as another monkey would, or at least he acts like a human well versed in monkey behavior.  John has been adopted and now lives in England and although in some ways he’s different than other children, he seemed to be adapting well when interviewed in 1999.

Marcos Rodríguez Pantoja is a famous case of a man who is said to have been ‘raised’ by wolves.  In his early childhood, Marcos was sold as a slave by his father to a man to tend his goat herd. Marcos was then brought to a small cave where a goat herder lived, watching the flock.  When the goat herder died, Marcos retreated into the Sierra Morena mountains of northern Spain where he trapped rabbits for food as the goat herder had taught him. Marcos watched other animals to learn what was edible and what wasn’t.

On one rainy night, the young boy sought shelter in a cave where he slept with wolf pups.  The first encounter with an adult wolf was perilous but Marcos claims he was befriended and sometimes given food.  Eventually police caught Marcos in his teens and forcibly dragged him into civilization. Even into his 70s, Marcos seemed to have a hard time relating to other humans.  A dramatized film and a documentary have made Marcos a minor celebrity in Spain and abroad. A main theme in the story of Marcos Rodríguez Pantoja and others like him is one of betrayal by humans and a strange sort of acceptance on the par of other animals.

There are many more accounts of children raised by or near other animals with no human contact.  Oxana Malaya is a woman who was ignored by alcoholic parents and took comfort and social contact from dogs in a kennel behind her house.  Neglected continuously from a young age, Oxana lived with dogs as her main companions for five years before being rescued. Malaya learned to bark, growl and act like a dog in virtually every way.  Today, Oxana is in her 30s and lives at a home for the disabled, being mentally much younger than her actual age. There are cases of children in Romania, Siberia, Chile and elsewhere raised by domestic dogs.  There are reports of kids raised by bears, sheep, cattle, goats and even in the Sahara by ostriches.

There was also a case of a child living in the dark in California with no contact whatsoever with any humans.  There is the famous case of ‘Victor’, a young boy found in the late 1700s in France living in the wild, scavenging and hunting whatever he could find and eventually turned over for research and education by academics.  Experts agree that how well children raised in isolation from other humans will reintegrate into society depends on how young they were isolated. Usually if language isn’t acquired to some degree by the age of 5, it never will be acquired.

In the cases where the people eventually grew up to get jobs, to find husbands or wives or friends of any type, there was some language learning before 5.  Victor never fully grasped any language or integrated into society. In some cases feral children were seen as little more than freak show attractions. Often once feral children who’ve readapted to society talk about the cruelty of children and other humans towards them.  Human society seems bewildering, money incomprehensible. Some of these former wild children are easily taken advantage of.

In cases where a child is abandoned and survives with closer interactions with other animals, the question becomes one of what does it mean to be human?  Some psychologists and philosophers have argued that our genetics play the most important role, but if five years with no human interaction can set the course of a lifetime, how can this be so?

Another question raised is what does it mean to be animal and how are we animals and specifically human animals?  Cases of humans raised apart from others of their own species are very rare but it seems that there is nothing so special about them.  We all if abandoned at a certain part of our lives have the capacity to lose our own special veneer of humanity, to embrace other ways of living, other ways of being a clever animal.  Some have argued that many of these children have severe learning disabilities and were abandoned for relatively short periods. What of the children that grew up to be functional adults?  Are they hoaxes or are they a window into the nature of our own reality?