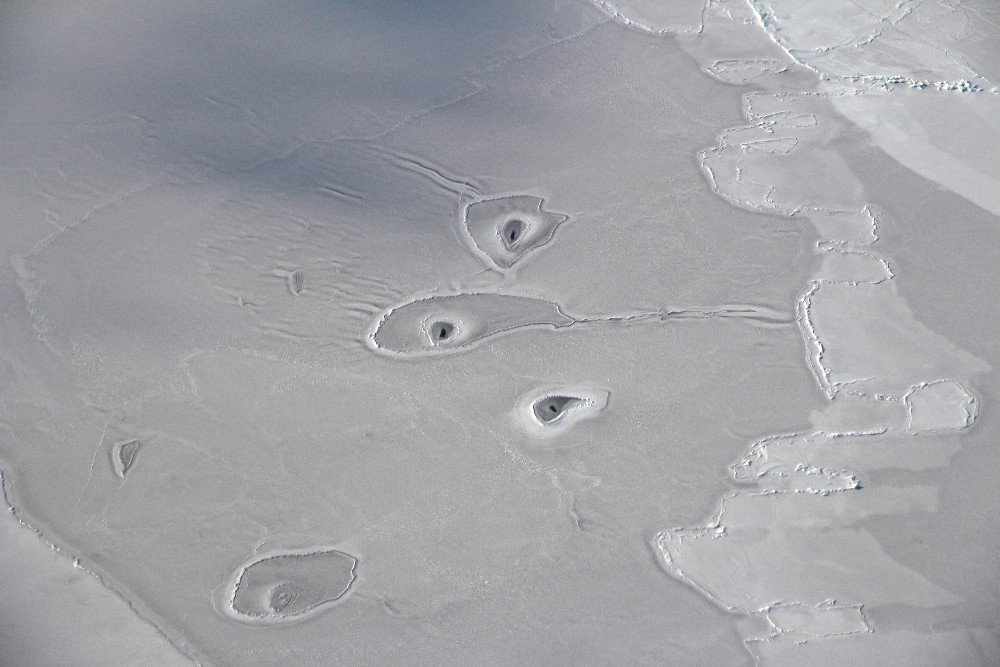 Two weeks ago, NASA posted a “puzzler” image from Operation IceBridge, asking readers if they could explain some mysterious holes spotted in the Arctic ice.

Recently, the agency posted the answer: The holes in the Beaufort Sea are areas where new ice is forming. Circular features around the holes show where the ice is still flexible. The area where the new ice is forming was most likely a long, linear area of water, the scientists said.

“The ice is likely thin, soft, and mushy and somewhat pliable,” Dr. Don Perovich of Dartmouth College told NASA. “This can be seen in the wave-like features in front of the middle ‘amoeba.’”

Some “finger rafting” – where two thin ice floes meet – to the right of the image indicates that the ice could be forming in a generally left to right motion when looking at the photo, he said.

“It’s definitely an area of thin ice, as you can see finger rafting near the holes and the color is gray enough to indicate little snow cover,” IceBridge project scientist Dr. Nathan Kurtz said.

Still, that doesn’t explain everything about the photo – particularly those circular, “amoeba-shaped” holes in the ice.

“I’m not sure what kind of dynamics could lead to the semi-circle shaped features surrounding the holes. I have never seen anything like that before,” Kurtz said.

A couple of experts on the Arctic suggested that seals might have created the holes so they could come up to breathe. But it could also be a feature of drainage or caused by warm spots of water, they said.

“The other possibility is that warmer water from Beaufort currents or out of the Mackenzie River is finding its way to the surface due to interacting with the bathymetry, just the way some polynyas form,” Dr. Chris Shuman of the University of Maryland said.