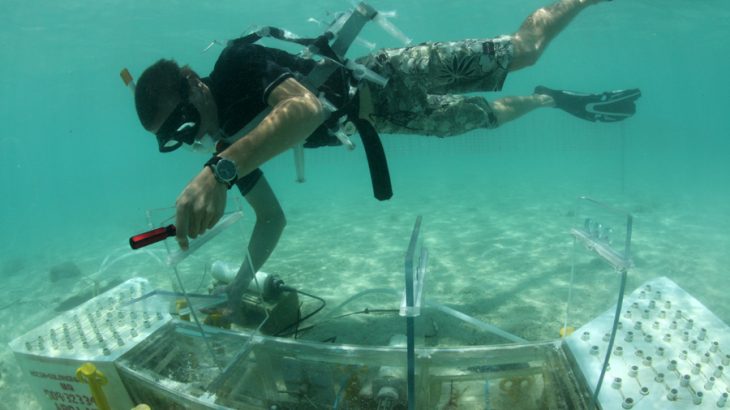 Increases in ocean temperature and acidity due to climate change have been linked to mass coral bleaching events and the decline of coral reef ecosystems.

Corals offer protection against flooding and storm surges and reef habitats host a diverse array of marine species that depend on corals for their survival.

As carbon emissions increase, more CO2 gets absorbed into the ocean which lowers the pH of seawater. Increased acidity is a key contributor to coral bleaching, and a United Nations report found that ocean acidity could double by 2100.

Researchers from the Smithsonian Tropical Research Institute set out to investigate the effects of ocean acidification on coral reef health.

However, while many studies on coral reefs have asked these same questions, for this project, the researchers took their experiments away from the aquarium and into the ocean.

“We wanted to get away from experiments in glass boxes and do them on the reef under natural conditions,” said David Kline, the leader of the study. “But we never imagined the differences would be so dramatic.”

Over a period of eight months, the researchers lowered the pH of seawater surrounding a living reef.

A device called the Free Ocean Carbon Enrichment (FOCE) system was used to pump carbon into the water which would show first hand how reefs respond to ocean acidification and if they can adapt to a rapidly changing environment. The researchers went through around five tanks of CO2 gas.

“Our underwater time machine (also called a Free Ocean Carbon Enrichment or FOCE system) used an array of sensors and dosing pumps to simulate future high CO2 conditions by controlled pumping of high CO2 seawater over both living and dead Porites cylindrica colonies in our open experimental flumes on the reef flat at the University of Queensland’s Heron Island field station on the Great Barrier Reef,” said Kline.

The reef went through a drastic transformation, and both living and dead corals were negatively affected by the increased acidity. Coral growth rates dropped to almost zero, and dead corals started dissolving twice as fast.

The results show that coral reef declines may occur sooner than previously realized. There was one silver lining to the study. The corals that were covered with living tissue were more resilient than their dead coral counterparts.

“The huge difference between the fate of living and dead corals in a natural environment gives me hope,” said Kline. “As we create marine reserves and learn how to increase the amount of living coral by restoring reefs, we’re setting up a positive feedback loop because living coral will grow the reef and slow dissolution.”

The study was published in the journal Nature Ecology & Evolution.