Crabs are meeting to mate at the Deepwater Horizon spill site • Earth.com 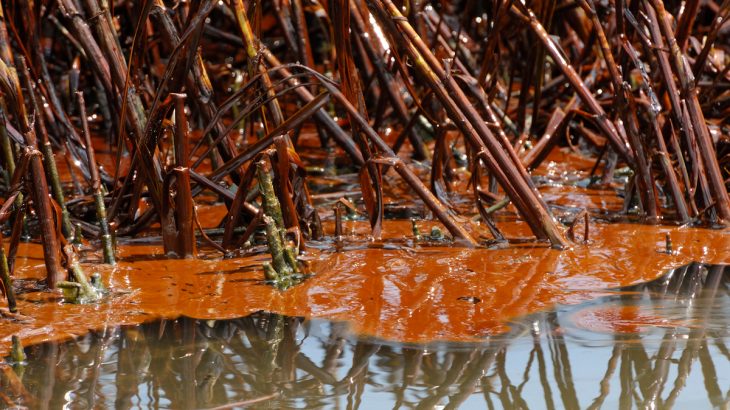 Crabs are meeting to mate at the Deepwater Horizon spill site

The Deepwater Horizon oil spill site may be attracting deep-sea crabs and shrimp, according to a new study.

Crustaceans are meeting at the site to mate, but exposure to the oil is negatively impacting the arthropods. Shells are turning black, the crabs and shrimp have become vulnerable to some parasites, and there are even reports of mutations and lost limbs.

The Deepwater Horizon Oil Spill, which started in April 2010 and went on for 87 days, was the largest accidental marine oil spill in history. Around four million barrels of oil spewed into the Gulf of Mexico a result.

For this study, the researchers investigated the impacts of the Deep Water Horizon spill seven years later, comparing biodiversity and species abundance for large benthic (the lowest level of the ocean) organisms at sites immediately after the spill and in 2017.

Remote operated were vehicles were used to record video footage of marine life 1,600 feet around the spill site, and these videos were compared to footage taken a few months after the spill.

The researchers discovered an increase in arthropod abundance near the spill site. There were nearly eight times more crab and shrimp near the well in 2017 compared to other sites.

Red deep-sea crab, red shrimp, and white shrimp were all abundant at the spill site, and the researchers say that the degrading hydrocarbons at the site are chemically attracting the arthropods.

Exposure to the oil at the site is negatively impacting the crabs and shrimp.

“Crabs showed clearly visible physical abnormalities and sluggish behavior compared to the healthy crabs we had observed elsewhere,” Craig McClain, the lead author of the study, told CNN. “Once these crustaceans reach the site, they may become too unhealthy to leave.”

Crabs and shrimp may be confusing the chemical signals from the oil spill for a sex hormone.

As predators eat the shrimp and crabs the toxins from the site are making their way up the food chain.

More research and monitoring is needed to fully understand the impacts of the spill and the slow rate of recovery of the deep-sea habitats near the well site.

“Human impacts on the environment never really go away. Loss of biodiversity can mean one species or thousands of individuals,” Clifton Nunnally, a co-author of the study told CNN. “We can’t allow this heavily impacted disaster site to slip from our collective memory, and further study is needed to shed light on the long-term impacts that oil spills have on fragile deep-sea ecosystems.”

The researchers published their findings in the journal Royal Society Open Science.