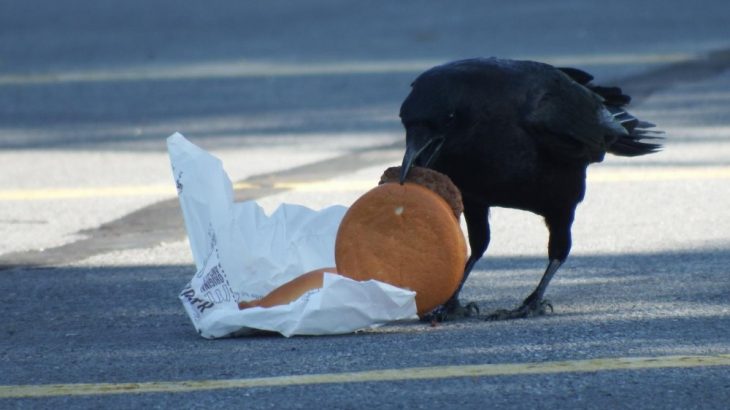 Does crow cholesterol show city living isn’t for the birds?

Humans aren’t the only animals to worry about high cholesterol – at least, not anymore. It turns out donuts, bacon and other discarded junk food may be leading to higher crow cholesterol rates.

Birds like crows and other animals that have adapted to city environments often do well because they’ve learned to scavenge human food. But, a team of Hamilton College researchers wondered, are all those leftover fries, chips, burgers and other food waste items good for them?

Led by Dr. Andrea Townsend, they took blood samples of 140 crow nestlings in California – some rural, some in high-population areas of large cities, and some from areas along the spectrum between the two. They also tracked the young birds’ survival rates.

The researchers found more birds had high cholesterol within California’s cities. To test their theory, the researchers fed a group of rural nestlings in New York a supply of burgers from McDonald’s, then tested. They found higher crow cholesterol among the fast food eaters than nearby nestlings who fended for themselves.

“Feeding wild birds can be a great way to connect with nature, and it can be a refreshing change to think that we’re doing something that helps animals out,” Townsend said. “At the same time, though, I do worry that some of the foods that humans give to wild animals, and living in an urban environment in general, might not be good for their health.”

However, researchers aren’t sure how much high cholesterol affects bird health. Survival rates for the urban California nestlings was lower, but it didn’t seem to be linked to cholesterol rates. In rural New York, the burger-binging birds actually scored higher on their body condition than their neighbors.

“Despite all the bad press that it gets, cholesterol has benefits and serves a lot of essential functions,” Townsend said. “It’s an important part of our cell membranes and a component of some crucial hormones. We know that excessive cholesterol causes disease in humans, but we don’t know what level would be ‘excessive’ in a wild bird.”

Still, that doesn’t mean that higher crow cholesterol isn’t dangerous, the researchers warned. And too much help from humans can actually harm bird populations.

“Wild birds haven’t evolved to eat processed food, and it might have negative consequences that we didn’t measure, or that will only show up over longer periods of time,” Townsend said.

The study has been published in The Condor: Ornithological Applications.