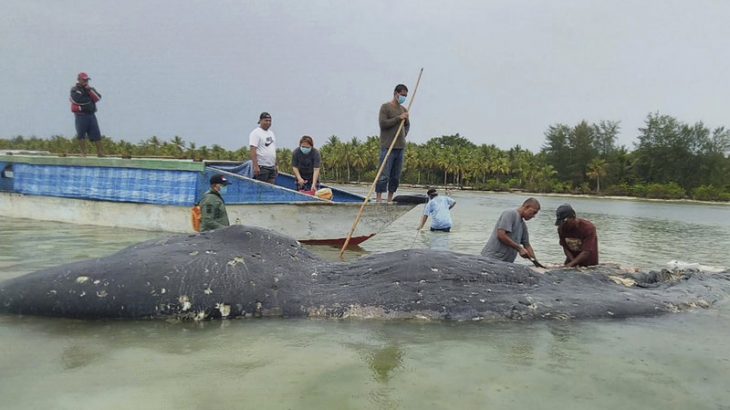 Dead whale found with a stomach full of 115 plastic cups

Thirteen pounds of plastic and waste were found in the stomach a dead sperm whale in Indonesia.

Researchers from the Wakatobi National Park, the Academy of Marine and Fisheries Community, and the World Wildlife Fund (WWF) tasked with studying the whale have not yet determined a cause of death, but its stomach contents highlight the realities of the plastic crisis currently taking over our world’s oceans.

The whale had washed ashore on Kapota Island in Southeast Sulawesi where it was first found by a team from the Wakatobi National Park, according to the Jarkata Post.

By the time the whale was found, it had already started to decompose which further complicated identifying a cause of death. According to NPR, the sperm whale was over 31 feet long.

Plastic is extremely problematic for marine wildlife, and this isn’t the first time a whale has been found with a stomach full of plastic.

When a whale eats plastic, it disrupts the digestive system and tricks the whale into thinking it’s full, according to National Geographic.

“At some point, their stomach fills up with trash and they can’t eat real food,” Regina Asmutis-Silvia from the Whale and Dolphin Conservation program told National Geographic. “You’re not getting any nutrients in and you’ve basically completely clogged your digestive system.”

Our oceans are filling up with plastic. Millions of tons of unrecycled plastic and microplastics enter the oceans every year, wreaking havoc on marine wildlife and habitats.

This latest incident is just one in a long, tragic line of the world’s wildlife suffering due to humanity’s widespread problem with pollution.