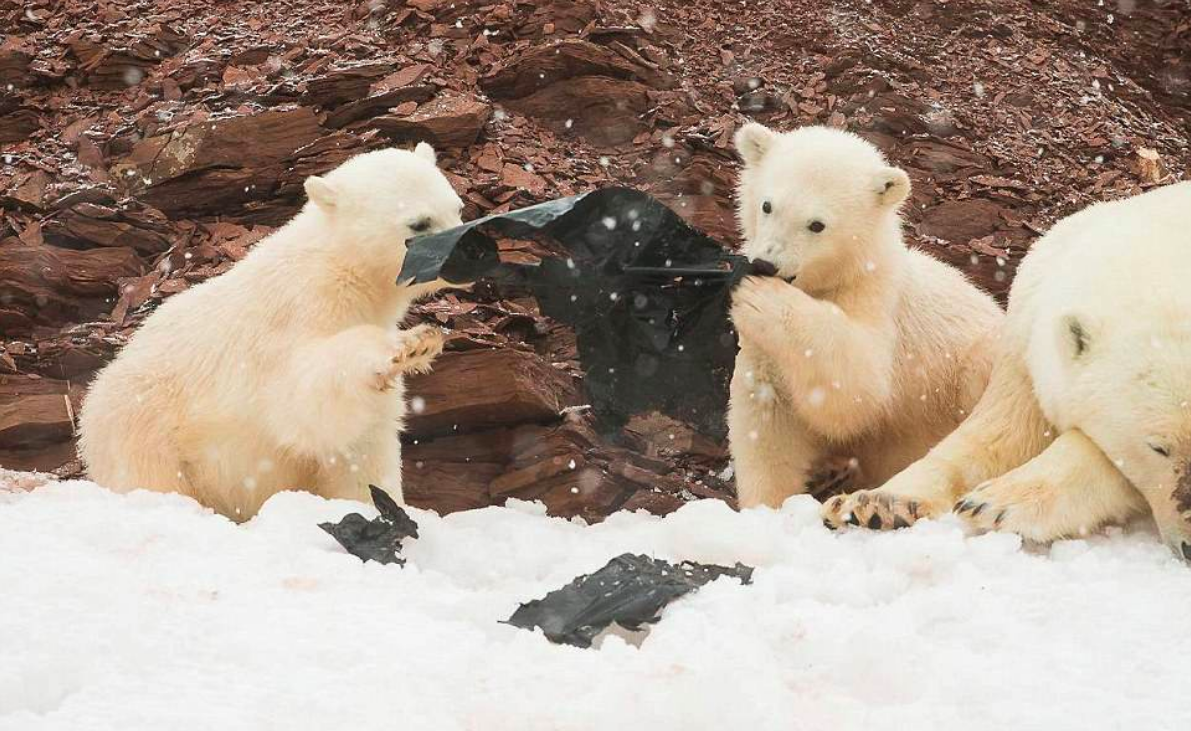 Images of two small polar bear cubs playing with a large piece of black plastic were captured along the coast of the Norwegian archipelago Svalbard, which is located about halfway between the North Pole and and Norway.

A group of scientists, artists, photographers,  and filmmakers recently completed a sailing expedition and campaign called Sail Against Plastic. The team set out to investigate and document plastic pollution in the Arctic Ocean.

The black plastic waste appearing in the pictures sticks out like a sore thumb among the pristine landscape of Svalbard, an island located hundreds of miles from Europe. Svalbard is so remote that humans are outnumbered by polar bears.

The images may not come as a surprise to many activists and environmentalists who have been warning about the alarming extent of plastic pollution across our planet’s oceans.

Claire Wallerstein was part of the Sail Against Plastic team, which spent 10 days investigating the water and air quality on the isolated beaches of Svalbard.

“We were very lucky to be invited to take part in this unique expedition, and had an amazing time seeing Arctic wildlife, stunning glaciers and experiencing 24-hour sunlight,” said Wallerstein.

“However, it was also a very sobering experience to see just how much plastic is making its way to this incredibly remote and apparently pristine environment.”

Wallerstein explained that the beaches were not so different from those in more populated regions.

“What we found on the beaches was sadly not so very different from what we find back home,” she said. “There was plenty of fishing waste, but the saddest thing was just how much of the waste blighting the Arctic is the same old disposable detritus of our daily lives – plastic bottles, cotton bud sticks, cigarette ends, wet wipes, polystyrene and food packaging.”

The team searched for both large plastics and microplastics in the water. They also tested the air for microplastic fibers and cleaned up beaches. Plastics were found on every beach that the group surveyed, and some of the waste had traveled over long distances.

Flora Rendell-Bhatti is a researcher from the University of Exeter.

“As plastic pollution breaks down it is harder to identify the sources of the fragments and fibers by eye,” said Rendell-Bhatti. “Our microplastic net sampled the surface waters in areas where there is currently little research.”

“Once the samples are analyzed back in the UK, this data will indicate the levels of microplastic pollution in Arctic waters around Svalbard.”