Fathoms and fathoms below: The weird life of the deep sea isopod • Earth.com 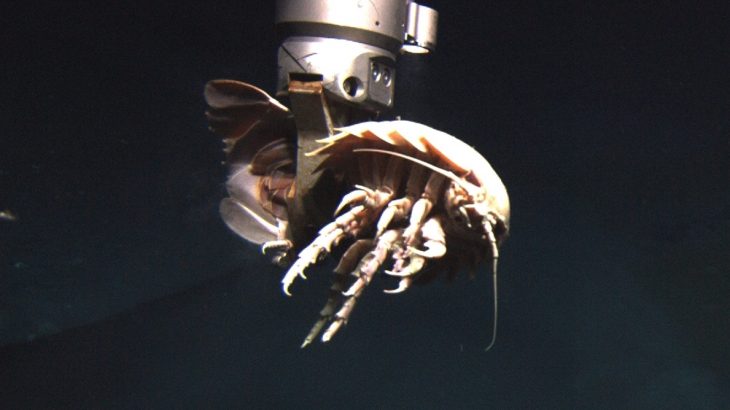 Fathoms and fathoms below: The weird life of the deep sea isopod

You can call them poor unfortunate souls if you like. They do seem like the type of creature into which Ursula the Sea Witch might transform her desperate victims. But really, the approximately 16 species of giant deep sea isopod have it pretty good.

Sure, they don’t see the light of day unless they’re hauled up by meddling humans, and their preferred food consists of rotting organisms from the pelagic levels above. But they don’t have many predators, they live in a state of semi-hibernation, and most of their food drops right in front of their admittedly alarming faces.

For such apparently lazy creatures, the members of the genus Bathonymus have been hugely successful. Aquatic relatives of the terrestrial pill bugs or roly-polies that many of us played with as children, they have been trundling about on the seafloor for some 300 million years.

Vacuuming up marine snow—organic matter drifting down through the depths, chomping on sponges and sea cucumbers, and feasting on the odd whale or sea lion carcass, these prehistoric invertebrates are among the few organisms that can survive the enormous pressures of the zones that they inhabit: from the sublittoral to the bathypelagic. They are typically found at depths of 550-7,000 feet.

Members of the crustacean family, they have segmented bodies and each segment sports either a pair of legs that assist them in scuttling about on the sand, or a pair of pleopods that facilitate swimming and respiration. (For such ponderously proportioned animals, deep sea isopods are surprisingly graceful swimmers. However, after gorging themselves on a particularly rich cadaver, they have been known to face-plant, apparently unbalanced by the decayed flesh in their guts.)

Their bizarre physiology and unusual size make them the stuff viral dreams. Extraterrestrial in appearance and habitat, these foot-long pillbugs have been mainstays of the weird news section for at least a decade. Increasingly innovative—and ecologically devastating—deep sea trawling enterprises have brought them to the surface in ever greater numbers and the photographs of these finds justifiably amaze and horrify the netizenry. 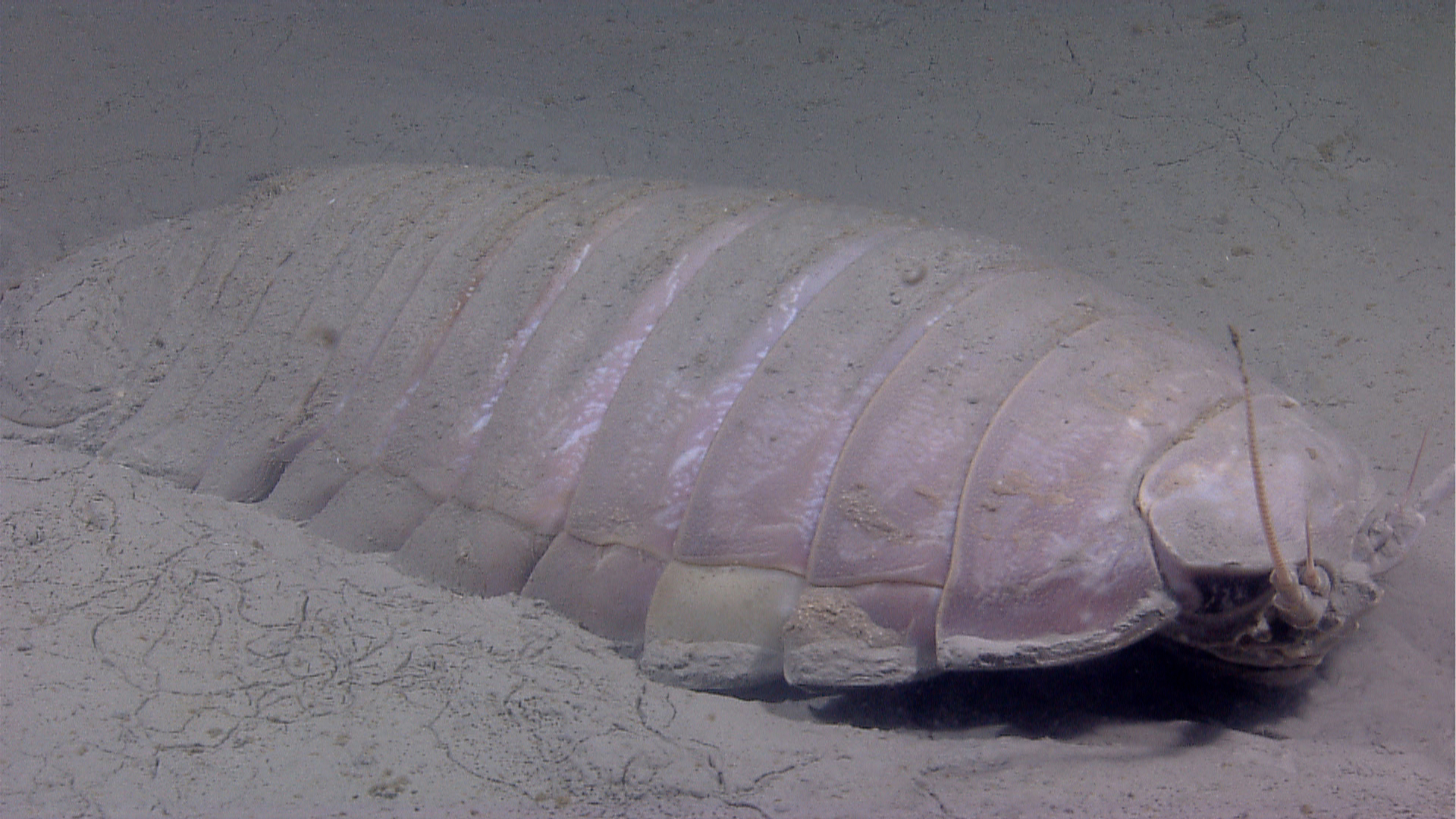 Once thought to be relatively rare, they seem to be quite common in the lowest reaches of the ocean. Some are inevitably dredged up by the massive nets employed by trawlers. And others are attracted by the distressed fish and other organisms that these operations ensnare. Deep sea isopods are nothing if not opportunists. They may even be more predatory than originally believed: one was captured on video lunging at a dogfish and grabbing its head, à la the Alien face huggers.

It is not entirely certain how they detect their food, though it is likely through a combination of chemosensory and mechanoreceptory techniques. Like all isopods, they possess two pairs of antennae. Their compound eyes, which contain up to 3,500 ommatidia, may assist them to some extent, though light penetration at the depths in which they are found is minimal. It has been found that when exposed to unfiltered daylight at the surface, their eyes are irreparably damaged. Whatever their mode of detection, it’s an effective one.

In April 2019, a group of researchers from the Louisiana Universities Marine Consortium (LUMCON) dropped a bunch of dead alligators culled by the state into the Gulf of Mexico. It only took a day for deep sea isopods to descend on the caracasses and begin devouring them. Undeterred by the thick hide of the reptiles, they burrowed right in using their four pairs of jaws. This startling discovery suggests that the creatures are highly attuned to their food-scarce environments and can rouse from their usual torpor at a moment’s notice in order to take advantage of any meals that may drift within their reach.

First discovered in 1879 in a trawling expedition in the Gulf of Mexico north of the Tortugas organized by oceanographer Alexander Agassiz and later described by zoologist Alphonse Milne-Edwards, the deep sea isopod was among the first organisms produced from the ocean floor. Its existence provided valuable evidence contradicting the Azoic hypothesis, an early 19th century theory that maintained life was impossible in the deeper reaches of the ocean.

The size of these crustaceans is likely due to the influence of the extreme conditions in which they live. The species are classified into giants, which max out at around 6 inches, and supergiants, which may be close to 2 feet long, as in the case of the largest, Bathonymus giganteus. Because the water is so cold, it contains more oxygen. Combined with the slower metabolism of creatures who can survive these conditions, it allows for the development of larger cells, and ultimately, body size.

Even its eggs are huge—at half an inch in diameter, they are the largest of any marine invertebrate. Deep sea isopods have also adapted to the fact that large food supplies such as whale falls (or alligator falls) are rare. Unlike many invertebrates, they store large amounts of fat. A deep sea isopod at the Toba Aquarium in Japan ate a single fish in January 2009 and survived until February of 2013 without another meal, testifying to the staying power of a slow metabolism.

They’ve got stamina in the pop culture sphere as well, particularly in Japan, where they are occasionally eaten. The Omoshiro Aquarium in Yokohama recently sponsored an event where visitors could try one of the smaller species, deep fried. Evidently, what little meat they have on them tastes a bit like shrimp. The Japanese have also come up with a huge array of isopod merchandise: everything from cell phone cases to plushies.

In real life, these creatures aren’t all that huggable. But they provide a hugely valuable ecological service in cleaning up the remains of the creatures that sink into their lightless milieu. And though they might seem safely removed from the human-induced ecological catastrophes at the surface, they’ve been found with plastic in their guts and are now common bycatch. Even a few hundred million years of evolutionary stability may not save them from the ravages of human carelessness. So enjoy these weird news darlings while you still can.