Is a destructive solar superflare less than a century away? • Earth.com 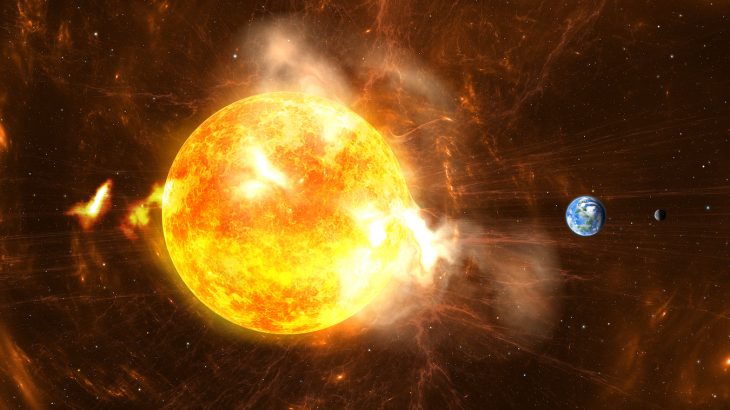 Is a destructive solar superflare less than a century away?

In the process of searching for planets orbiting around distant stars using the Kepler Space Telescope, NASA scientists observed stars releasing the occasional burst of energy known as a “flare” – but some of the flares they observed were thousands of times more intense than normal. Scientists now call these events “superflares,” and it’s still not exactly clear how they occur. But the more pressing issue was for researchers to determine whether or not our sun was capable of emitting a superflare.

A normal solar flare looks like an intense flash of light – often combined with the release of plasma – coming from the surface of the star. Our sun has flares all the time, but a superflare has a resulting energy blast of radiation that would disrupt electronics across the planet were it to hit the Earth. This could cause widespread blackouts and short out the communications satellites in orbit. Obviously, this would be a major issue if it happened in our technology-driven era.

“When our Sun was young, it was very active because it rotated very fast and probably generated more powerful flares,” says astronomer Yuta Notsu, a visiting researcher at the University of Colorado Boulder. “But we didn’t know if such large flares occur on the modern Sun with very low frequency.”

In order to investigate this question, Dr. Notsu and an international team of researchers analyzed superflares detected from 43 Sun-like stars by using data from the European Space Agency’s Gaia spacecraft and New Mexico’s Apache Point Observatory. Their study was published in The Astrophysical Journal and found that, while younger stars produce the most superflares, older stars such as our Sun are able to produce superflares too.

“’Young stars have superflares once every week or so. For the Sun, it’s once every few thousand years on average,” explains Notsu. “If a superflare occurred 1,000 years ago, it was probably no big problem. Now, it’s a much bigger problem because of our electronics.”

Notsu also believes that there is “some possibility” that a superflare on our sun could occur in the next 100 years. And while researchers don’t know exactly when the next superflare will hit Earth, they are certain that one will eventually happen. Before this occurs, we would need to develop shielding that protects electronics on the ground and in orbit from these destructive bursts of high-energy radiation. Hopefully, this study will have given us enough time to begin this process before our Sun has another superflare.