‘Plasma rain’ on the Sun has been linked to an unexpected source • Earth.com 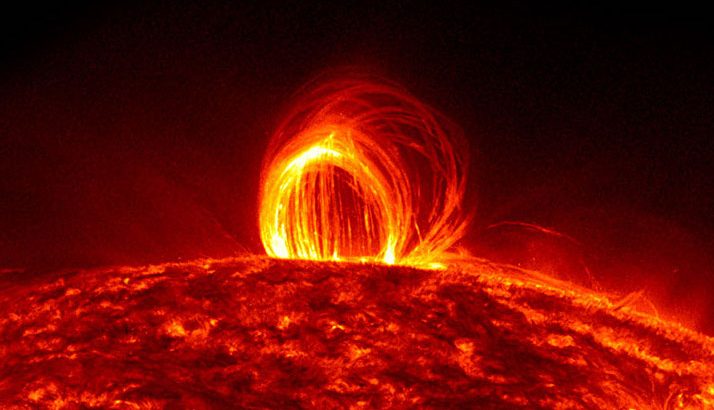 After searching for coronal rain, sometimes known as ‘plasma’ rain, in photos of the Sun for nearly a year and a half, NASA Goddard scientist Emily Mason realized that she had been looking at it all along. When she finally turned her attention to small, previously overlooked magnetic loops, she discovered images of coronal rain.

Mason was looking for coronal rain in helmet streamers when she noticed tiny magnetic structures that were unfamiliar to her.

“They were really bright and they kept drawing my eye,” said Mason. “When I finally took a look at them, sure enough they had tens of hours of rain at a time.”

At first, Mason was unaware of the significance of the small magnetic loops.

“She came to group meeting and said, ‘I never found it – I see it all the time in these other structures, but they’re not helmet streamers,’” said study co-author and NASA solar scientist Nicholeen Viall. “And I said, ‘Wait…hold on. Where do you see it? I don’t think anybody’s ever seen that before!’”

Mason explained that coronal rain works similarly to rain falling on the Earth, “but instead of 60-degree water you’re dealing with a million-degree plasma.”

Plasma is an electrically-charged gas that flows along the curving lines of powerful magnetic fields to form coronal loops. At the point where the loop is attached to the Sun, the plasma is superheated from a few thousand to over 1.8 million degrees Fahrenheit. Next, it expands up the loop and gathers at its peak. When the plasma cools, it condenses and falls back to the surface of the Sun as coronal rain.

“These loops were much smaller than what we were looking for,” said study co-author Spiro Antiochos. “So that tells you that the heating of the corona is much more localized than we were thinking.”

While the findings do not solve the mystery of how the Sun’s corona is 300 times hotter than its surface, the research does narrow down the region where coronal heating is taking place. “We still don’t know exactly what’s heating the corona, but we know it has to happen in this layer,” said Mason.

The study results also indicate that these coronal rain events may be the source of the mysterious slower and denser parts of solar wind. Based on past observations of solar wind, scientists expected to find coronal rain in helmet streamers, which are magnetic loops millions of miles tall that stick out from the sun during solar eclipses.

Experts have known for more than two decades that helmet streamers are one source of slow solar wind, which undergoes a similar extreme heating and cooling process as coronal rain. Computer simulations have shown that coronal rain is also present in these massive magnetic loops, and the NASA team will continue to investigate.

The study is published in Astrophysical Journal Letters.